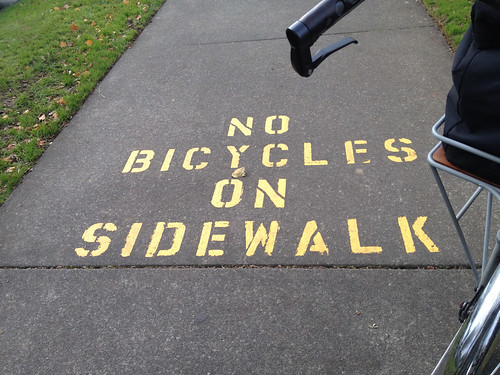 That’s all fine and good unless there’s no other way to get from A to B.
(Photos by J. Maus/BikePortland)

An annoying gap in the North Portland bikeway network is on a path to being fixed.

The problem has to do with how people on bicycles travel between I-5 and N Interstate Avenue on N Failing Street. The Failing Street Pedestrian Bridge over I-5 is a crucial link that connects two neighborhoods (Humboldt/Mississpi and Overlook), many commercial destinations, and two major north-south neighborhood greenways (Michigan and Concord).

Unfortunately, smack dab in the middle of all that is a large Kaiser Permanente campus that houses several large buildings and surface parking lots. Making matters worse is the MAX light-rail line that makes it impossible to continue south on Interstate from Failing. Because of these constraints, most people opt to ride on a wide sidewalk through Kaiser property. 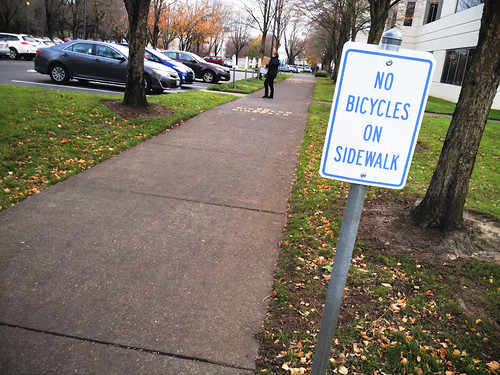 Another view of the sidewalk where Kaiser has prohibited bicycling.

That option was never ideal, but it didn’t seem like such a terrible thing until this past January, when KP staff put up signs and painted large yellow letters on the ground that read “No Bicycles on Sidewalk.” The sidewalk is only about 8 1/2 feet wide, and it’s outside a medical office so it’s easy to see why employees don’t want people cycling on it (and yes, they can legally do this because it’s on private land).

But even so, as soon as those warnings went in we started getting emails from readers who were disappointed and confused.

“I rode to the Kaiser Interstate campus this morning with my kids,” one woman wrote to us via email. She continued:

“Imagine my surprise when I found “No bicycles on the sidewalk” stenciled in yellow paint at regular intervals along the sidewalk. Now, I understand that whoever directed this was acting in the interest of making the sidewalk feel safer for pedestrians. However, it’s also pretty clear that they have no idea how to make their campus more accessible for cyclists – you know, people who are trying to “thrive”. There’s a disconnect somewhere in there.”

We got several emails like that. People weren’t mad at KP; but they were perturbed that they were simply left to their own devices without a real solution for navigating through the campus. The other thing our readers mentioned was how this lack of bike access didn’t jibe with KP’s public face. Not only are they the presenting sponsor of the City of Portland’s Sunday Parkways events, they have also invested heavily in their “Thrive” advertising campaign that puts bicycling front and center (ironically, their TV ad shows a lot of people riding on sidewalks). Thankfully, the messages finally made their way to the right people within KP. Last month the organization’s Director of Community Health, Molly Haynes, coordinated a site visit with KP and PBOT staff to learn more about the issue and map out possible solutions.

Yesterday evening I bundled up and joined Haynes, KP Facilities Manager Matt Justiniano, KP External Affairs Director Dan Field, and PBOT active transportation and safety staffer Greg Raisman for a outdoor meeting at the campus. (It’s worth noting that both Haynes and Field were on the Policymakers Ride this past August.)

We looked at the situation from many angles and considered several different options. A desire line through a dirt road and into the parking lot. This area
will be leveled and improved with a curb ramp.

In the end, the group decided to move forward on the following option*:

In the very basic map below, I’ve colored the new route in bright blue,the neighborhood greenways in green, and the sidewalk in red: And this is the wide road in the parking lot that will likely be marked with sharrows in each direction: The KP staff are supportive of this approach and they’re working on a construction estimate. We haven’t heard any confirmations about when the work would be done or how/if it will be funded, but we’ll keep you posted. Raisman had a great idea to kick off the improvements with a neighborhood bike ride this spring.

Thanks to KP for stepping up to address this issue. Stay tuned for further developments!

*Note that KP hasn’t officially committed to anything. This is just a proposal under consideration that had support from the people who showed up yesterday.