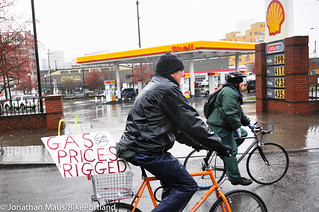 Less so than they were, maybe.
(Photo: J.Maus/BikePortland)

Cheap gas coming: The price of oil plummeted to its lowest non-recession level since 2007 on Thursday and Friday. It’s being described as the result of a major price war launched by OPEC in hopes of ending North America’s oil boom.

Vision zero bikes: Sydney is considering banning bikes from its “shared cycle way” network because someone walking might get hurt and sue.

Car-free Sundays: After London’s mayor saw them at work in Jakarta, he’s asking his transport agency to consider them, too.

Dynamic routing: Have Dutch bike signals finally gone too far? The latest tells you the fastest of two possible ways to bike around a big intersection.

Phoenix bike share: The new hybrid dock/dockless system in Phoenix has launched with just 100 bikes. You’ll be able to pay $2 per ride to park away from one of 27 stations.

Hit-and-run casulaties: As biking has risen in Los Angeles, so has the number and the share of hit-and-runs that injure people riding. Four in 10 victims are minors; eight in ten of hit and runs go unsolved.

Happiness machine: Time on a bike is a treatment for the depression of Paul Watson of Brooklyn, who got support this year from the New York Times’ annual charity drive and aims to one day own a bike shop.

Measuring bike sharing: Don’t miss the smart comments on this post about which bike share systems are performing best.

Bus lane lawsuit: A few Clark County residents are trying to force a public vote on whether to upgrade the county’s busiest bus line to bus rapid transit.

Assigning blame: A new San Diego study has found that police coded people on bikes as being “most at fault” in 56 to 60 percent of crashes that injured or killed a bike user. (Local advocate Sam Ollinger is quoted acknowledging that some people are breaking the law, but suggests building a better system instead of just assigning blame.)

Highway protests: From Tahrir Square to Oakland, civil demonstrators are moved to seize highways. Why?