“How many of you are from the cycling community?”
(Photos by J. Maus/BikePortland)

Any doubt that there is vast pent-up demand for more single track mountain bike trails in Portland vanished last night when a sea of supporters swamped a Metro meeting on the North Tualatin Mountains project.

Around 200 people crowded into the Skyline Grange last night to tell Metro that they want this project to include single track trails specifically built with cycling in mind.

At one point, Metro Parks Planner Mark Davison stood on a chair to address the crowd. When he asked “How many of you here tonight are from the cycling community?” it looked like nearly every hand in the room went up. One of those hands belonged to Chris King, founder and owner of Chris King Precision Components. King’s company employees over 100 people making bicycle parts in a factory only about 9 miles from where these new trails would be built.

Each attendee at last night’s meeting was given a comment card and three dots. The dots were numbered one through three and people placed them on a list of activities in order of priority. By the end of the meeting there was no more space next to “Mountain Biking”. 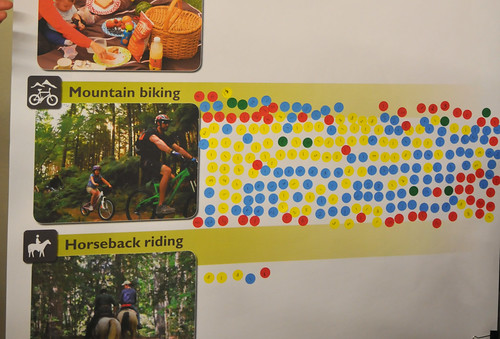 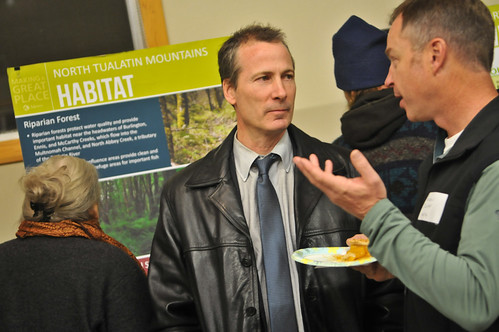 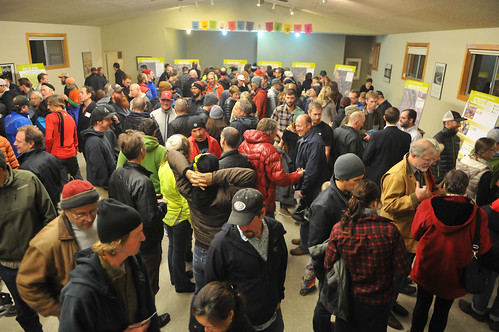 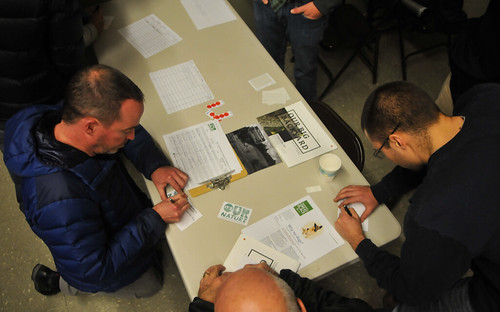 The event was the second of four meetings intended to introduce the public to the project and gather input about what types of activities people want to do on the 1,300 undeveloped acres of land situated across the street from Forest Park’s northern boundary. The land is split into four parcels and it was purchased by Metro via bond measures approved by voters in 1995 and 2006. 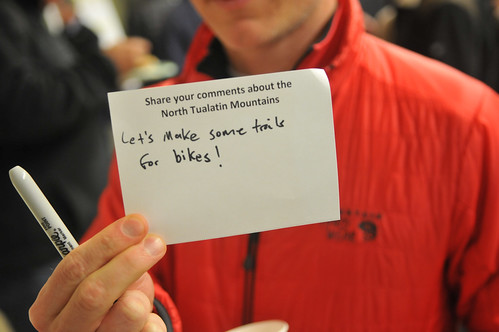 Bob Umberhandt has only lived in Portland for a year. “I’m from Richmond, Virginia,” he shared with me as he filled out a comment card, “And it’s kind of embarrassing how few mountain bike trails there are in Portland. Having to drive to ride is frustrating.” Umberhandt, now a resident of St. Johns, brought his two young daughters (ages seven and nine) to the meeting as well. “My girls want a place to ride too,” he said.

Umberhandt’s official comment was short and to the point: “Let’s make some trails for bikes!” 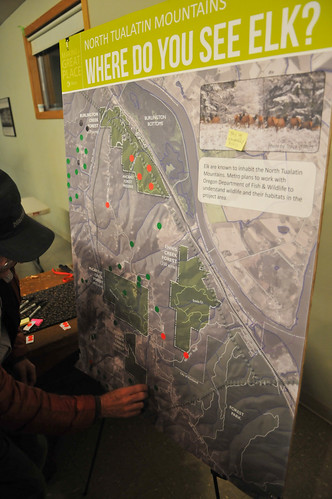 While the support for cycling overwhelmed the meeting, there were also a few voices who voiced concerns about how the project will impact elk populations. (It’s important to note that, unlike the discussions around mountain biking in Forest Park, because the Tualatin Mountains property is undeveloped, there are no existing hiking trails and therefore no entrenched advocates for hiking.)

During a brief Q & A session, one woman (I regret not getting her name) said, “I realize the mountain bike community is here in force, but how will the presence of elk be balanced with that?”

Davison responded by saying the agency is bringing in elk experts to assess the parcels and that all decisions will be weighed against those findings. At this point, Metro is asking people who live in the area to tell them where they’ve seen elk herds. A poster board asking people where elk have been spotted had several dozen dots placed on it.

Asked point-blank whether their plans will include mountain bike trails, Metro staff was strategically coy.

And Davison said on several occasions that “Metro is a science-based organization” and as such, all decisions on how the land is developed will be made with an eye toward “protecting resources first and foremost, and then providing access in a way that doesn’t [negatively] impact the resource.”

That type of framing bodes well for mountain biking hopefuls. It’s important to remember that the current policy in Forest Park is the result of politics, not science. Contrary to what some advocates who oppose improvements to bicycle access have convinced Parks Commissioner Amanda Fritz of, conservation goals and bike access are not mutually exclusive.

(UPDATE: For more on the elk issue, see this comment below left by longtime bike advocate John Campbell.)

Even with the elk issue looming, mountain bike advocates remain very optimistic at how this process will turn out. The fundamentals of this discussion (versus the one around Forest Park) are much more in their favor, and last night’s strong show of support only adds to their outlook.

— For those of you who missed the meeting, you can leave an official comment via this online form. Learn more about this project on Metro’s website and send feedback directly to project manager Dave Elkin via email at dave.elkin@oregonmetro.gov.