An indoor food market planned for the west side of the Morrison Bridge might bring the money needed to improve Portland’s newest and arguably most awkward downtown bridge landing.

At an open house and design forum on Saturday, Dec. 13, the public will get its first big chance to review and weigh in on the proposal to convert the little-used parking lots inside the bridge’s cloverleafs to a space inspired by Vancouver BC’s Granville Island or Copenhagen’s Torvehallerne. A local biking advocate, who identified the opportunity, is urging people who care about the area to join him in attending.

Andrew Holtz, a longtime member of the Multnomah County Bicycle and Pedestrian Advisory Committee, said he doesn’t yet have a precise concept for how to better connect the Morrison Bridge’s biking path with the downtown grid.

“We know it’s screwed up now,” he said. “And here’s somebody who’s going to be doing some extensive transportation connection in the area, so let’s not botch this opportunity.”

Because the county owns the bridge, Holtz’s committee was part of overseeing its construction, which finished in 2010 after a 12-year advocacy effort. But though the crossing itself is quite comfortable, the landings were essentially unfinished.

“We just ran into this thing about the west end where there was no money to really make a good connection,” Holtz recalled Wednesday. “So they tuck in this thing with signs to say ‘This is how to use it.’ Which is not the way anybody actually uses it.” 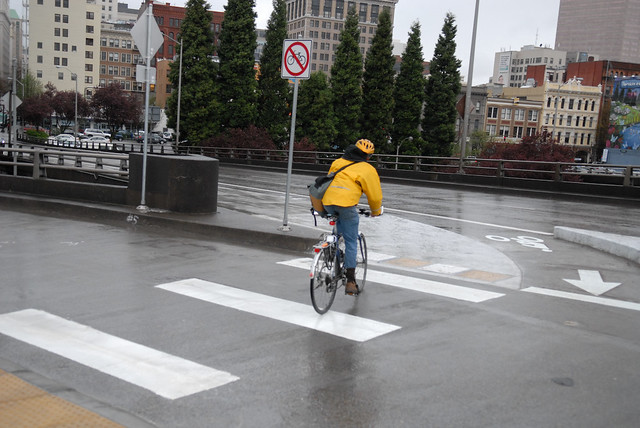 The problem is that westbound bike traffic runs onto Alder Street, which is one-way eastbound. To avoid sending bikes riding the wrong way on a downtown sidewalk, the bridge directs people down the freeway offramp sidewalk to Naito.

“It’s like a three-block detour to go around, so people just ride the wrong way on Alder to get to 2nd,” Holtz said. “There needs to be a good way for people heading westbound to cross the bridge to continue heading west or northwest.”

The good news is that after a couple months of work, Holtz has made contact with the people behind the proposed James Beard Market, who seem receptive to the issues he raises. An intuitive and popular bike connection would of course be a significant boon to the market, which is eager to minimize the amount of space required for auto parking — not to mention sidewalk conflicts between people biking and walking.

“My thinking was just make sure we’re at the table at the very beginning,” Holtz said. “It sounds like they are eager for input, so I’m hopeful that they will take the comments that people have and really work them into the plan. … I don’t know where they see their traffic flows going. I think there are people who use that route more than I do who might have some strong ideas for what destinations besides this new market people might have in the area.”

Update 1:20 pm: Not everybody likes the idea of changes to this bridge landing. Though this isn’t necessarily related directly to the Beard Market, in September the Central Eastside Industrial Council called on its members to email the Portland Planning and Sustainability Commission to “save the Morrison Bridge west side off ramps.”