Ask Portland bike advocates, planners, or city staff what our best example of a high-quality bikeway is and many of them might say the SW Moody cycle track. That’s why we were so disappointed when photos appeared on Twitter yesterday showing large delivery trucks parking on it.

SW Moody is the main artery between the burgeoning South Waterfront district and downtown Portland. Its cycle track opened three years ago (read my first impressions here) and was funded through a $23 million federal stimulus grant that also paid for a reconstruction of the street to facilitate a streetcar and light rail line that connect to the new Tilikum Bridge.

A new mixed-use development on SW Moody includes several ground-level retail businesses including a bakery and a deli. According to people who ride the route regularly, it’s common to see delivery trucks using the cycle track to load and unload.

Yesterday, Kiel Johnson, owner of the Go By Bike valet service and bike shop under the Portland Aerial Tram, posted this to Twitter

In response, another picture emerged from Flickr user zakschwank: 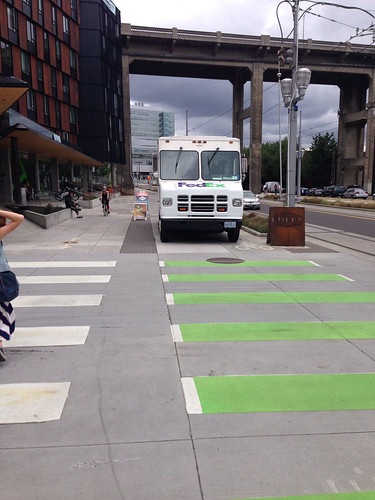 PBOT has taken note of the tweets. Agency spokeswoman Diane Dulken said in a telephone interview this morning that, “It is a safety issue.” Dulken added that it’s also a violation of city code (16.20.130) and City of Portland parking enforcement officers will respond to the area once a report has been made.

The city hotline for parking violations is 823-5195 and Dulken urges everyone to call that number to report this type of behavior.

Dulken also said that this could also simply be an “awareness issue.” “The truck drivers might not know it’s not a loading zone,” she said. On that note, Dulken added that staff from PBOT’s Active Transportation Division will visit the business owners to do some educational outreach.

As an aside, during my time in Copenhagen last year I noticed trucks would sometimes block cycle tracks. I was fascinated at how people on bikes didn’t seem to care much. They would just roll off the cycle track, go around the truck, and keep on riding (often without even putting their phone down!); or simply stop and wait for the unloading to finish. This “no big whoop” attitude in Copenhagen was in stark contrast to the anger with which many American riders react. 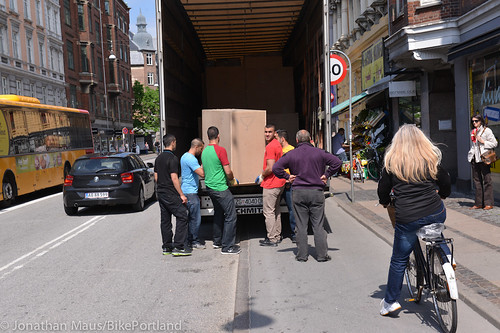 Scene from Nørrebrogade in Copenhagen.
(Photo by J. Maus/BikePortland)

I’ve come to realize the difference in response is that here in the U.S., this type of thing is like the straw that breaks the camel’s back. It’s just one more sign of disrespect and potential danger along a route that is likely full of several others — and therefore the angry response is from the cumulative impact of other frustrations. Whereas in Copenhagen, when a truck blocks the cycle track, it’s just a tiny blip on an otherwise perfectly calm and pleasant bicycle journey and therefore there’s no built-up stress looking for an outlet.