From the Bike Mechanic Challenge back in June to their successful Transportation Trivia Nights, the northeast Portland based Community Cycling Center has a knack for dreaming up great ways to support their cause.

In the spirit of the season when little kids dream of their first bike, the CCC challenged five of its staffers to compete in a “Balance Bike Build-Off”. For the uninitiated, a balance bike is a tiny bike for toddlers without pedals or gears and a seat so low it can be powered by running instead of pedaling. They’re simply the best way to learn to how to balance, and ultimately ride, a bike.

In the Build-Off, the five entrants were given three weeks to design and build, “unique, handcrafted, and totally awesome balance bikes.”

The results are fantastic. Check out more photos of the bikes and a learn more about each one below (descriptions from the CCC, photos by Charles Edelson): 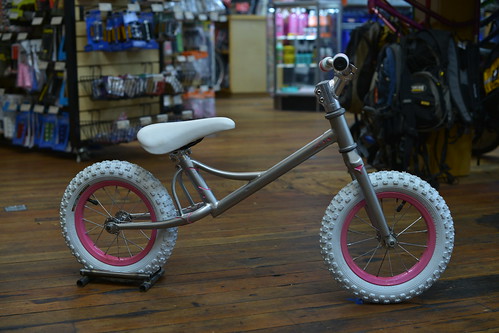 In making Pearl’s Bike, TimTim tried to work from things that inspired him about frame building. In particular, he looked to the work of Claude Butler – a renowned builder in the 30s – mid 50s. He was an early adopter of bi-laminate construction methods. This method allowed for strong joinery, while at the same time being very pretty. Both of these qualities attracted TimTim when it came time to build his balance bike. 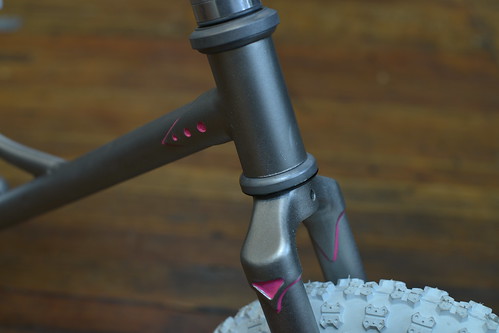 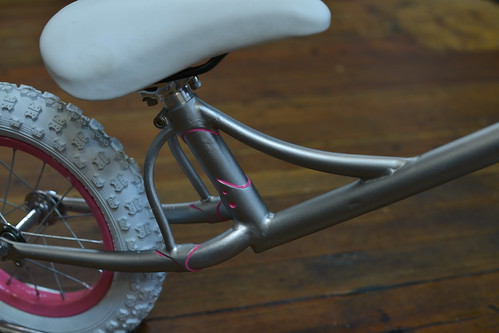 This bike is made completely out of skateboards. Even the steering bearings are made from skateboard wheels and bearings. James carefully shaped the rest of the bike from whole and partial skateboards using a band saw. No other kid on the block will have an Ollie like this one. Deconstructing a full sized Schwinn down to it’s bare components, Evan preserved much of the original Chicago Schwinn joinery in this balance bike. In reconstruction, Evan kept with Schwinn style, keeping all his new joints seamless and creating a miniature one-of-a-kind Ratrod. Original Schwinn parts include kickstand, handle bars, headset, and frame. The saddle is made from a cut down from a person’s banana seat – also from a Schwinn. Fascinated by the idea of using a non-traditional frame material and keeping things as natural as possible, Forrest built the body of his frame from bamboo while wrapping all of his joints with manilla rope fibers (from banana leaves) unwound one by one from the original rope. The result is semi-organic joinery that is way beyond cool, and, as far as we know, found on no other Balance Bike. The MicroFat has fully functional suspension, disc brakes, and 3 inch tires. Made from all up-cycled materials, the MicroFat’s wheels came off of a wrecked Schwinn electric scooter, the saddle is a carved down Brooks, and the suspension fork off of a bike that was too far gone for use in Holiday Bike Drive. The wheels proved as much of a challenge as inspiration; in order to make the wheel fit, he had to cut the fork up and make it wider. (*Shipley is one of my favorite local builders. I’ve previously profiled his scraper bike and his 4-x-4 urban hauler)

The best part is that all money raised from bids on all five bikes will go toward the CCC’s Holiday Bike Drive and other programs. Swing by the CCC retail shop at 1700 NE Alberta to take a closer look at the bikes. You can place a bid at the shop, by calling (503) 287-8786, or via email at balance.bike@communitycyclingcenter.org.

The post This is what happens when you ask Portlanders to build balance bikes appeared first on BikePortland.org.