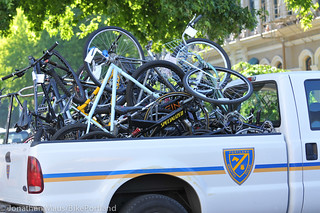 Over $2 million worth every year.
(Photo: J. Maus/BikePortland)

The latest numbers released by the Portland Police Bureau (PPB) are definitely worthy of attention. They show that bike theft is costing Portlanders well over $2 million a year and that at least 8 bicycles are stolen in our city every single day.

Just before the recent Bike Theft Summit, the PPB released their latest report (based on statistics from the Police Bureau Data System (PPDS)). Before sharing an analysis, keep in mind that improving the accuracy and availability of these stats is part of our larger effort on bike theft. I also want you to be aware of the following caveats:

Even with those caveats, I think we have enough numbers to help us get a clearer picture of the problem. Here are my takeaways:

Bike theft has grown significantly since 2008

The chart below shows the number of reported cases from 2011 through October 2014 (I’ve estimated the total 2014 amount): Going back further, I’ll use numbers reported by Sarah Mirk in her excellent 2010 article in The Portland Mercury. Mirk reported that there were 2,300 total reported cases in the 21 months between May 2008 and February 2010. That’s an average of 110 bikes reported stolen each month. In their most recent report, the PPB says there were 7,678 bikes reported stolen in the 34 months from January 2012 through October of 2014. That’s an average of 226 stolen bikes per month — a whopping 105% increase.

Based on my own estimates I think it’s possible that by the end of this year we’ll go over 3,000 reported bike thefts for the first time. That’s an average of about 8 bikes every day of the year.

Are thieves developing a finer taste for bikes? About half the stolen bikes in the PPDS are given an estimated value. In all of the past four years, bikes with a value of about $500 have accounted for the most thefts. One interesting trend in the numbers is that the average estimated value of a stolen bike has more than doubled since 2011 — from $320 to an estimated $732 in 2014. This could mean that thieves are getting more selective.

Also eye-catching in the latest report is the number of high-end bikes being stolen. Over 16% of them had an estimated value of over $1,000.

According to the PPB’s latest bike theft report, from January 2012 through October of this year there have been 7,678 reported bike thefts. One of my goals is to get better data to compare these numbers directly to other, similar crimes. For instance, the PPB’s online CrimeStats tool tells us there were 8,956 cases of “vehicle theft” in the same period. That number includes cars/trucks and motorcycles, which leads me to assume the number of cars stolen in Portland is similar to the number of bikes. We need more data to get a clearer picture of this comparison (I’m also curious about total estimated value of cars stolen versus bikes stolen).

Using these estimated values, the PPB says the total value of property loss due to bike thefts is over $2 million per year. According to my estimates, that number spiked from just around $1 million in 2012. The huge increase is from a combination of more — and more valuable — bikes being stolen.

Downtown/northwest is where the action is Over 25% of all reported bike thefts from January 2012 through October of this year happened in the five neighborhoods we typically think of collectively as “downtown.” The Pearl District, Downtown, Old Town/China Town, Northwest, and Goose Hollow accounted for 1,931 of the 7,678 bike thefts in that period. Downtown led the way with 780 thefts while Northwest and the Pearl District had 422 and 411 respectively.

Getting more police resources dedicated to this problem is one of our top priorities. When that happens, we know exactly where we’d like them to focus.

These stats are a good start; but we need to make them even cleaner and more complete in order to really grasp the state of bike theft in Portland. Hopefully someday all the local datasets — Bike Index (which is the same as ours), Project 529, and the PPB’s reports, will all be integrated into one.

Stay tuned to our coverage as we continue to raise the profile of this issue and take more steps forward.