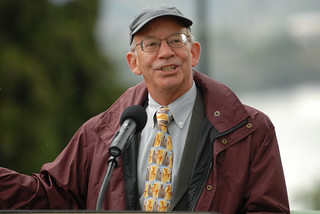 Oregon Congressman Peter DeFazio — who likes to mention in speeches that he’s the only member of Congress who has ever worked as a bicycle mechanic — is taking his fight for safer bicycling to the United States Government Accountability Office.

Citing a “troubling increase in pedestrian and cyclist fatalities in recent years,” Rep. DeFazio has joined with fellow House Democrats Rick Larsen from Washington state and Eleanor Holmes Norton from the District of Columbia to request a GAO investigation into the issue.

In a statement released today, the trio said they want the GAO to investigate, “trends and causes of accidents involving pedestrians and bicycles and to make recommendations about improving safety.”

“The safety of everyone on the road should be our top priority. Thanks to coordinated efforts, motor vehicle accident deaths are declining. But the same is not true for the most vulnerable people on our roadways – pedestrians and bicyclists. The GAO can give us a better idea of the reasons behind why pedestrian and cyclist fatalities are going up. We want to know what more Congress can do to ensure the highest level of safety for all of those using our roads,” said Larsen, DeFazio and Norton.

And here’s the text of their letter they’ve sent to Gene Dodaro, Comptroller General of the U.S. Government Accountability Office:

While overall traffic-related fatalities have been declining in recent years, our most vulnerable road users—pedestrians and cyclists—have experienced an increase in fatalities. In 2012, 4,743 pedestrians were killed, or an average of one fatality every two hours. Also in 2012, 726 cyclists were killed on our roads. These pedestrian and cyclist fatality totals each represent a 6 percent increase from 2011.

Furthermore, we are concerned that conventional engineering practices have encouraged engineers to design roads at 5-15 miles per hour faster than the posted speed for the street. This typically means roads are designed and built with wider, straighter lanes and have fewer objects near the edges, more turn lanes, and wider turning radii at intersections. While these practices improve driving safety, a suspected unintended consequence is that drivers travel faster when they feel safer. Greater speeds can increase the frequency and severity of crashes with pedestrians and cyclists who are moving at much slower speeds and have much less protection than a motorized vehicle affords.

Because of these increasing fatality numbers among the most vulnerable road users, we request that the Government Accountability Office (GAO) investigate the trends and causes of these roadway fatalities and the challenges associated with improving pedestrian and cyclist safety. In particular, we are interested in information about the relationship between vehicle speed and roadway fatalities, and how roadway design speeds and other common practices may exacerbate this problem. Accordingly, we would like for GAO to examine:

Thank you for your consideration.

This formal request comes on the heels of other signs from Washington that attention on creating safer conditions for cycling is on the rise in Washington.

The latest budget passed by Congress included a provision pushed by the League of American Bicyclists to set a national goal to reduce biking and walking fatalities. And back in September, US Department of Transportation Secretary Anthony Foxx announced an 18-month campaign to, “reduce the growing number of pedestrian and bicyclist injuries and fatalities through a comprehensive approach that addresses infrastructure safety, education, vehicle safety and data collection.”