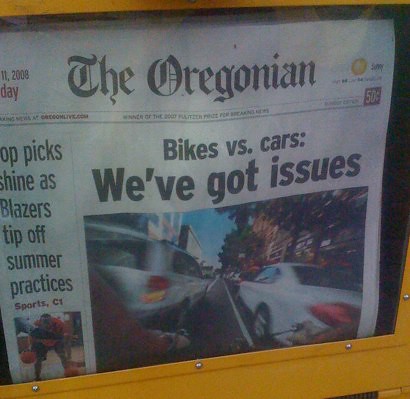 Well, at least that much is true.
(Photo: J.Maus/BikePortland)

People who don’t know BikePortland well, especially those who don’t bike much themselves, are sometimes surprised to learn that we don’t see ourselves as an environmentalist website.

Cutting your carbon is a great reason to ride a bike, but there are plenty of others.

Even so, most bike users have probably spent some time thinking about the relationship between small-scale and large-scale environmental action. Maybe that’s why so many readers’ nerves were touched by the link in this week’s Monday Roundup to the Oregonian editorial writers’ odd editorial explaining that they wouldn’t be editorializing about climate change this year because climate change is a national and international issue.

Reader Nicholas Skaggs, posting what seems to be an email from a friend of his, seemed to capture many readers’ feelings in a few paragraphs that slashed the newspaper’s argument from several angles.

From my friend Mark, regarding the Oregonian:

Except when we do talk about climate change, which we did last week, when we lambasted the governor for trying to make a difference, because not adding a drop to the bucket is hurtful to Oregonians, and it’s a discussion best held on a national and federal level.

Even though all of our readers suggested we focus on climate change, if you’ve read the Oregonian you know we have a distinct view, we decided not to cover climate change because it’s best talked about on a national and federal level.

Except when we do we’re definitely in support of the exploiters and the people who are producing carbon emissions, which we don’t talk about as being part of the problem, because that conversation is best held on a national and federal level.”

For his efforts, we’ve got a nice and crisp $5 bill headed to Nicholas Skaggs. (We’ll let him decide whether to pass it on to Mark.)

Thanks to everyone who participated in the comments this week.