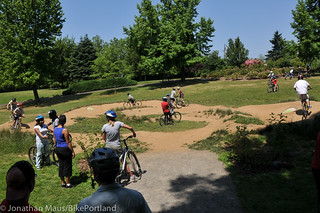 Almost one year after Portland Parks Commissioner Amanda Fritz quietly destroyed hopes of new singletrack bicycling opportunities in Forest Park (at least in the short-term), off-road advocates plan to deliver a strong message to her at an upcoming budget hearing.

Their request? Find the money to fund a citywide mountain bike master plan that would address Forest Park trails and other cycling opportunities like family-friendly pump tracks in local parks.

It’s an idea proposed by Fritz herself and one they feel will finally break the logjam that’s preventing the Parks Bureau from moving forward on any significant projects that improve access for bicycles.

“Show up and tell Commissioner Fritz that the time is now to fund that plan and start moving forward on making Portland more off-road biking friendly.”
— NWTA call to action.

In February 2014 Fritz announced via a blog post that, “I believe that a citywide Master Plan for cycling recreation is needed prior to embarking on individual projects.” That was a blow to advocates who had spent years working in good faith with Fritz’s predecessor (Commissioner Nick Fish) only to have promises broken and processes derailed.

Some off-road advocates feel the call for a master plan (made first by Parks Director Mike Abbate in a letter to the president of the Northwest Trail Alliance on January 21, 2014) and claims of budget woes are just more stall tactics. They say the current Forest Park Natural Resources Management Plan does not prohibit the creation and use of singletrack and they cite several examples where Fritz has found Parks funds for projects she personally cares about. There’s also some concern that advocating for the master plan would effectively halt any projects in the pipeline.

Regardless of those reservations, advocates plan to support Fritz’s idea and put all their weight behind the citywide master plan at a public hearing on Wednesday. With that plan in place, they figure there will be no more excuses for City Hall

“Show up and tell Commissioner Fritz that the time is now to fund that plan and start moving forward on making Portland more off-road biking friendly,” reads a call to action sent out by the NWTA this week.

Andrew Jansky with the NWTA says they plan to ask for $200,000 for the planning effort. Most of the money in Parks’ 2015-2016 budget is spoken for; but there’s still room for Fritz to use discretion and fund other priorities.

The NWTA launched a petition on Moveon.org back in November urging City Council to create a “citywide master plan for recreational cycling” that they say is, “decades overdue.” The scrappy organization with about 1,000 members has collected over 2,500 signatures so far.

NWTA staff and members plan to present that petition at Wednesday’s hearing. A key argument they’ll try and make is that too many kids lack safe places to ride bikes in Portland parks. They’re hoping for a large turnout of people who value mountain biking and off-road cycling in all its forms — from pump tracks to singletrack.

If last month’s huge show of support for bike trails in Metro’s North Tualatin Mountains project is any indication, they won’t be disappointed.