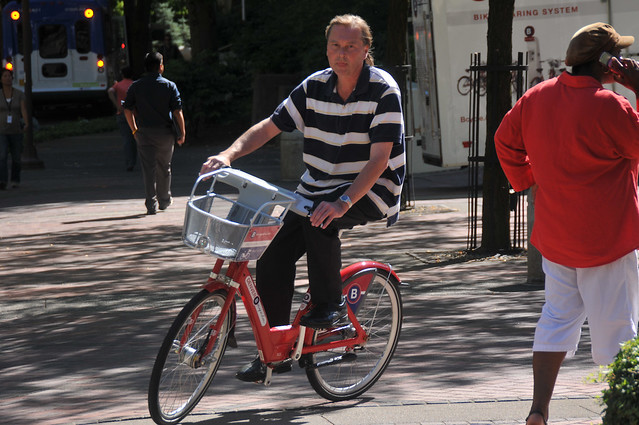 A demo of bike share equipment in Portland, 2011.
(Photo: J.Maus/BikePortland)

It’s looking likely that Eugene will be Oregon’s first city with a public bike sharing system.

After being put on ice last summer after it narrowly missed the cut for lottery-funded “Connect Oregon” grants, Eugene’s bike sharing hopes surged back in December when unallocated funds gave applicants a second chance at the coveted state grants.

On Wednesday the state’s top stakeholder committee recommended a Eugene bike share system as their #2 priority statewide for the new round of money.

If the governor-appointed Oregon Transportation Commission accepts that recommendation at its meeting next month, Eugene will get 28 stations and 210 bikes. That’d make it one of the largest college-town bike share systems in the country.

“Young people these days really value bike share as an amenity. It’s also helping to create an identity for our city as we grow.”
— Eugene Transportation Planning Manager Rob Inerfield

2″We did a citywide survey that found that a third of Eugene residents bike at least once a month, but only 8 percent ride every day,” said Rob Inerfeld, transportation planning manager for the City of Eugene.

As we wrote last January, the bus rapid transit line that runs between the University of Oregon and downtown Eugene has run out of space.

Lightly subsidized bike share trips, Inerfield said, are “a much less expensive way to deal with being over capacity” compared to adding another bus or two to relieve that crowding.

Out of the proposed Eugene system, four stations and 40 bikes would be owned by the University of Oregon, while the other 24 stations would be city-owned and city-subsidized. The two systems would be interoperable, however. Lane Transit District might chip some money in too.

Among cities in Oregon (which is by far the country’s biggest state for bike commuting) Eugene ranks second in Oregon for bike commuting by its residents. About 8 percent of Eugene work commutes happen by bike, trailing only Corvallis’s 12 percent. (These numbers, from the U.S. Census, don’t include student trips to class. Portland, meanwhile, ranks third with 6 percent.)

This is far from a done deal. The powerful Oregon Transporation Commission has the right to change or rearrange the list as much as they like.

The $4 million that the state program unexpectedly has to spend now are the remainder from $42 million total for the two-year funding cycle.

Thanks to advocacy from the Bicycle Transportation Alliance and others, 2014 was the first year biking and walking projects have been eligible at all.

Last year, when the City of Portland had a verbal arrangement with a sponsor to launch a bike share system of their own, the city had applied for this same program to pay for “phase 2″ of Portland’s system, expanding it beyond the central city.

Alta never bid for the University of Oregon’s 4-station system, and the university selected a proposal from competitor B-Cycle. But Inerfield said the university’s agreement with B-cycle is about to expire, so it’s not clear who the supplier or operator of Eugene’s possible system would be.

The Oregon Transportation Commission will discuss these “second-chance” projects at its monthly meeting in Salem next Thursday. On Feb. 19, it’ll select a final list of grantees.

Inerfield said he can’t put a timeline on when Eugene might launch its bike share system if it secures this grant. But he said he’s excited about bike share in part because of its potential to boost Eugene’s economy by making it a more attractive place to live.

“Young people these days really value bike share as an amenity,” he said. “It’s also helping to create an identity for our city as we grow.”

It’s also, he added, a way to improve safety for everyone on a bike.

“Drivers see more people biking; that makes biking safer,” he said. “But I think you need that basic level of bicycle infrastructure. We have that.

“Certainly we have a lot more work to do, of creating a network of protected bike lanes in our downtown,” Inerfield added.