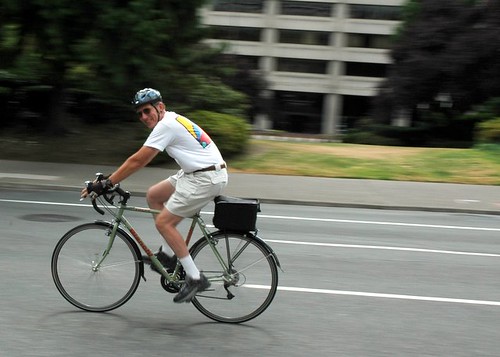 Anti-aging machines: A UK test found that the endurance, strength, metabolic health, balance, memory function, bone density and reflexes of people age 55 to 79 who bike regularly are indistinguishable by age.

Too-smart wayfinding? Waze and other smartphone apps that plan routes based on real-time traffic patterns are telling people in cars that they can save time by taking side streets. Neighbors don’t like it.

Biking equity: The founder of Slow Roll Chicago combines a movingly personal story about how bicycling saved his life with an insightful list of the unique obstacles to biking in many black communities.

Transpo journalism: After two years, Streetsblog Chicago has found it closed by the national Streetsblog network but hoping to reopen with a more local mix of donations, grants and advertising.

Bike challenge: The nationwide German version of the Bike Commute Challenge not only focuses on getting elected officials to participate, it gets them to leave their personal car in the town square the whole time as proof of their commitment.

Bad joke: A 21-year-old British stockbroker was fired after tweeting: “Think I just hit a cyclist. But I’m late for work so had to drive off lol“. (He later said it was a joke and there was no such incident.)

The optimal gas tax to counteract the various costs motor vehicles impose on the public would be $4.36 per gallon rather than the current 49.5 cents. Here’s how our tax stacks up internationally: Fatality map: The Oregonian has mapped the 133 people who died while walking or biking in the Portland metro area between 2008 and 2012.

Teaching streets: After three years of advocacy, a Northern Virginia community is building a Dutch-style “traffic garden” where kids can learn safe biking, walking and driving in a realistic environment.

Camping fees: A national park in Maryland is closing a budget gap in part by raising hiker-biker site fees from $0 a night to $20.

Historical fantasy: Remember that year automakers issued a recall for every car ever sold on account of dangerous design?

Mountain bike trap: A 64-year-old woman in North Vancouver, B.C., is the alleged creator of a wire trap that clotheslined a mountain biker there in 2013. It’s a rare moment of actual violence in the area’s conflict between hiking and biking.

Violent clickbait: The apparently Seattle-based author of a post on the highly respected website Matadornetwork.com says that one of the seven rites of passage of living in Portland is to “daydream about driving cyclists off the road on a regular basis.”

Scofflaw self-interest: How many people who run red lights on bikes are doing it because it actually feels more safe?

Finally, your video of the week is a guide to being the most pretentious (but also culturally respectful!) bike lover you can be:

The post The Monday Roundup: Anti-aging machines, a self-balancing bike and more appeared first on BikePortland.org.