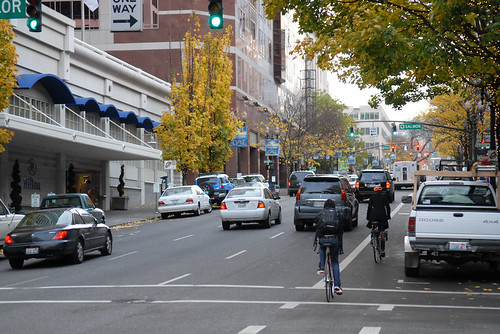 Want to lead the public process on a project that will likely be the most important investment in downtown bicycling access in the history of Portland? Then step right up and submit your application.

Yesterday, the Portland Bureau of Transportation posted the job announcement for a Capital Project Manager that will focus specifically on their Central City Multi-Modal Safety Project.

That project, which is already over two years in the making, would establish a network of protected bike lanes through the heart of downtown Portland. So far, the city plans to spend $6 million (from a federal grant) to make it happen.

Just how the shape of downtown changes is still up in the air. And that’s something that the new project manager will help decide. Reached today via phone, PBOT Capital Program Manager Dan Layden said they’re looking for someone that “can deliver a complicated project — from both an engineering and political perspective.”

Asked why the project is so complicated, PBOT Transportation Policy, Planning and Projects Group Manager Art Pearce told us it’s all about meeting the community’s expectations. “I think there are a lot of expectations around what we might be able to do with this funding; but there are a lot of challenges to deliver on those high aspirations.”

PBOT themselves has played a role in setting such high expectations. Always careful to not anger any stakeholders prematurely, their grant application said the project would “preserve capacity for important uses” while it would also “create as much separation as possible between people walking or bicycling and automobile traffic.” The key for whoever takes the reins of this project will be to balance both of those goals.

It’s no surprise PBOT is approaching this project with caution, given what’s at stake in terms of both the amount of investment and how the project is vital to their adopted goal of reaching a 25% bicycle usage rate by 2030.

Three years ago the agency got railroaded by the Portland Business Alliance for trying to add a protected bike lane to SW 12th Avenue. Sources say the PBA opposed the SW 12th Avenue project because they felt PBOT hadn’t fully considered how it might impact traffic flow on adjacent streets. The city’s lesson from that debacle is to have a comprehensive downtown bicycle network plan in place before asking for the PBA’s blessing on “one-offs.”

While there’s likely to be a lot of hand-wringing about auto parking and freight access preservation, the Bicycle Transportation Alliance has already said they see the project as, “An opportunity for us to make a big bold political statement about committing space on a major thoroughfare to bikes.”

As an interesting side note, Dan Bower, the PBOT employee who spearheaded the grant that funds this project, has since left the agency to become executive director of Portland Streetcar, Inc. But Bower’s fingerprints will likely remain on the project: As of last night he’s one of 13 new members on the city’s Bicycle Advisory Committee — a group that will likely hold considerable sway in where any new bikeways go and what they end up looking like.

The grant money for this project doesn’t officially kick-in until 2016, so PBOT hopes to start some of the work now and hit the ground running when the formal public process begins late this summer.

— Read our past coverage of the Central City Multi-Modal Safety Project.