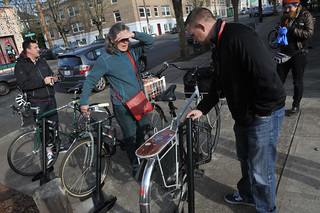 Park A Bike’s Christopher Luyet explains
the features of his “bike dock”.
(Photos by J. Maus/BikePortland)

Bike thieves have upped their game and rack manufacturers see a business opportunity.

Not content with using mere bolt-cutters to snip your cable lock or a mini car-jack to pry open your u-lock, thieves are now using power saws. Yes, power saws that can easily zing through the rounded pipes used in over 6,000 of those official blue “staple” Bureau of Transportation bike racks and countless street signs that people lock to when there’s no staple nearby.

Just this morning we learned about the latest power-saw-bike-theft victim via reddit.

Christopher Luyet hopes to capitalize on growing fears that standard bike racks can’t be trusted. He’s the president of Park A Bike, a Sacramento-based company that sells a range of bike parking products.

Luyet had been negotiating a sale with a southeast Portland building owner for several weeks when he heard about Gina Carlson. Carlson is the woman who had her $2,000 Trek stolen last week by someone who sawed through the rack and slipped her bike right off it.

“I told [my perspective customer], if you buy these racks from me I’ll buy Gina a new bike,” Luyet shared Wednesday during a product demo in Portland. The offer was accepted, so now there are nine of Luyet’s Varsity Bike Docks in front of a commercial building on SE Hawthorne (at 17th) and Carlson has a new bike coming. 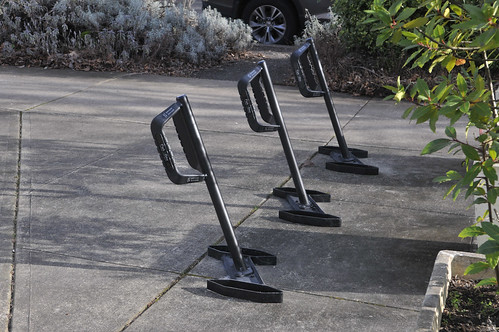 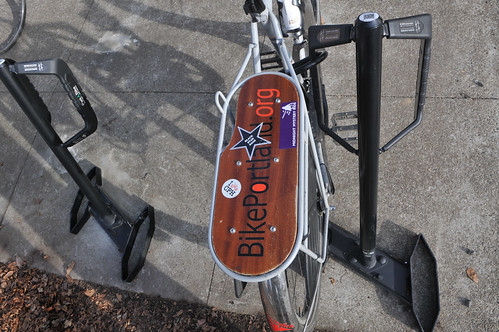 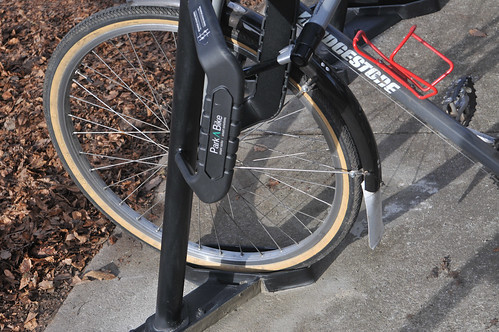 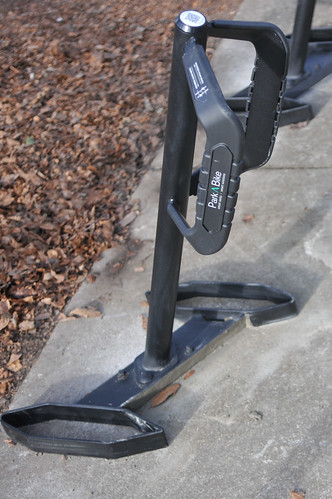 Luyet’s “bike dock” is much different than a traditional staple rack. It looks like something out of Star Wars with its angled main bar, winged upper flanges and diamond-shaped feet. Luyet says the design was conceived with the help of David Takemoto-Weerts, the bicycle coordinator for one of the most bike-friendly cities in America; Davis, California.

There are several clear advantages of the Park A Bike design. The upper flanges are coated with rubber which not only prevents frame damage but keeps your bike from slipping around. The design also encourages proper, secure locking by making it easy to get a u-lock around your wheel, frame, and the elliptical bar. The wheel troughs are also a smart idea because they encourage users to place their wheels in the right place, which not only lines up the frame and wheel in the right spot for locking, but also creates a smaller, and more predictable sidewalk footprint when the bikes are locked.

And, according to Luyet, his rack is much more secure than a PBOT staple. “We use case-hardened steel, so you can’t come out here with a sawzall and cut this thing.” He also pointed out that his tubing is 1/8-inch thick — twice as stout as PBOT’s.

At $225-$325, the Park A Bike racks are significantly more expensive than PBOT’s staple racks, which cost the city just $80 a piece.

But ask someone like Gina Carlson if it’s worth it and you’ll get a quick answer. “Instead of just writing if off like they have been,” she said, “they need to install better bike racks.”