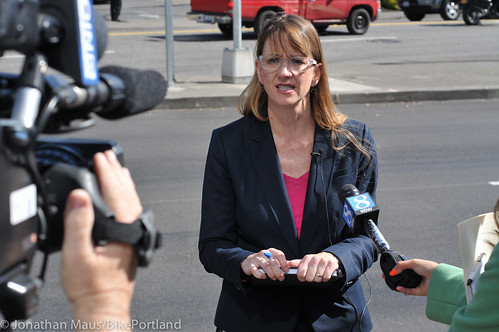 Portland’s transportation revenue plans may be stalled, but its top appointed transportation official is moving ahead with a two-pronged policy agenda that can be pursued without much new money — and might even help create its own.

“We have a job at PBOT to make better use of the street space that we do have, including the parking zone.”
— Leah Treat

One of Director Leah Treat’s goals for 2015, she said Tuesday, is “getting on offense on parking” by creating a “set of tools” that neighborhoods will be able to use to charge for parking or to, in some cases, remove it to make room for bike lanes or public parklets.

Another: start enacting a plan to eliminate all traffic deaths, a concept known as Vision Zero.

“We’re ready to roll,” Treat said in a brief interview after Tuesday’s presentation.

Treat’s remarks were delivered at a luncheon speech to the Portland chapter of the transportation professionals’ group WTS.

They also included a preview of something the city began working on soon after Treat’s 2013 hire: the first of what would become a series of two-year work plans for the Portland Bureau of Transportation.

During her presentation Tuesday, Treat laid out her two biggest issues for the year.

Putting a price on parking Treat said that managing Portland’s population growth will require charging people for parking cars on more city streets rather than giving the space away for free to anyone who wants it.

“We’re adding more jobs,” she said. “That’s great news for our economy. But it also creates a lot of tension. … Portland is not adding more street space. So we have a job at PBOT to make better use of the street space that we do have, including the parking zone.”

Parts of the city that already have parking meters, she said, should take a cue from San Francisco or Seattle and vary the meter prices based on demand, with an aim to reduce cruising by making sure there’s always one parking space open on every block.

Other neighborhoods — she showed a slide that used Hollywood and Southeast Hawthorne as examples — should get parking meters for the first time. Still others might see maximum parking time limits to allow turnover, or residential permit systems.

“You can’t come out with a one-size-fits-all approach,” Treat said, describing the parking reform as an effort to “provide the tools to neighborhoods” that would let them control their own parking situation. “Customers need to be able to shop and support local businesses without spilling over into local neighborhoods.”

She said the public outreach effort will begin with a “parking summit” this year, gathering downtown businesses and other stakeholders to discuss the issue.

“We won’t be able to succeed without the businesses on board and supporting the changes we need to make,” she said. “We have to recognize the high cost of free parking.” 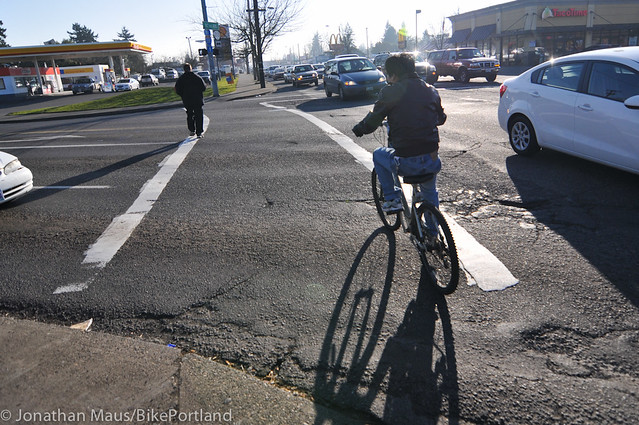 Foster Road is set to get a safety-enhancing road diet in 2016 that will also add bike and turn lanes.
(Photo: J.Maus/BikePortland)

“We need to place a much higher priority in this city on safety,” Treat said.

In 2013, she noted, Portland’s traffic fatality rate was twice its homicide rate.

“When I was a junior in high school, my best friend was killed driving too fast on a windy roadway,” Treat said. “In college, one of my best friends was killed riding his bicycle. … I’m never going to get them back. No one is.”

She speculated that everyone in the room knew someone who had died in traffic.

Treat said Vision Zero would mean more 4-3 road diets to reduce traffic speeding and weaving and more of the rapid-flash crosswalk beacons that she said reduce walking deaths by 80 percent.

Safer streets would help the economy too, she said. She cited studies estimating that traffic fatalities cost Oregon’s economy $422 million each year, and Portland’s $150 million.

“It’s a vision that lets Portlanders lead a healthy and active life,” she went on. “Vision Zero attracts to Portland the people and companies that will provide middle-income jobs that we need to keep our economy going.”

In her presentation, Treat acknowledged that her goals are ambitious. But at several points she said the city can’t afford not to have these arguments now.

“It’s come time for us to start prepping for the future, and it’s not going to be easy,” she said.

To help guide these upcoming citywide discussions, Treat shared a sneak peek of PBOT’s “two-year workplan.” We first looked into that plan last year and PBOT says it will be released in full on February 3rd. The plan is built around six major themes (including Vision Zero) and it will act as a “city-driven blueprint for how PBOT can help achieve the goals of the people of Portland.”