During a construction project last summer, the Oregon Department of Transportation seems to have discovered that there’s a way to cut extreme speeding on a curving two-mile stretch of Southwest Barbur Boulevard where six people have died in the last five years.

Was it closing the passing lanes? Lowering the posted speed limit from 45 to 35 mph? Upping traffic enforcement and penalties? Simply marking it as a construction zone?

The agency did all of those things at once, so it isn’t sure which one worked, and it currently has no plans to find out.

Meanwhile, the state-owned street has returned to normal indefinitely.

At a neighborhood meeting on Wednesday a state spokeswoman said that ODOT is reluctant to restripe the street with one less passing lane because, in part, all lanes would be needed if Interstate 5 collapses in an earthquake.

Safety was ‘not the focus’ of state analysis 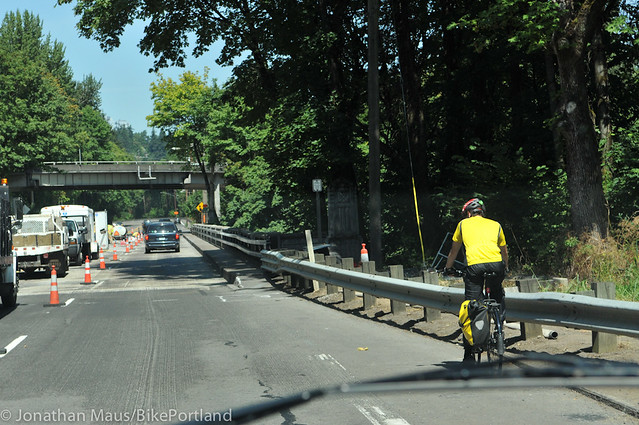 SW Barbur in August, when repaving work created a temporary simulation of a possible road diet. For northbound auto traffic on Tuesdays, Wednesdays and Thursdays, the only major effect was to slow average travel speeds by an average of 68 seconds over two miles.
(Photo: J.Maus/BikePortland)

But they didn’t discuss the apparent safety benefits of the project, which had also been illustrated by the data they gathered, because they said they hadn’t been assigned to assess safety.

“It’s really not the focus,” said Chi Mai, a senior traffic analyst and modeler for ODOT. “Our focus was to look at the average [traffic speeds and volumes] and compare them.”

Among those who called for ODOT to assess immediate safety improvements to Barbur were Lewis and Clark College, the City Club of Portland, Oregon Walks, the Bicycle Transportation Alliance and Portland Transportation Commissioner Steve Novick.

By examining those averages, ODOT determined that during the Tuesday, Wednesday and Thursday morning traffic peak, removing a lane from that two-mile stretch slowed the typical northbound car by an average of 68 seconds, with the most congestion between 8:15 and 8:45 a.m. The agency also found that the rush-hour slowdown led to no observable diversion of cars onto Terwilliger Boulevard or other alternative routes.

We wrote about these findings in our coverage last month.

As we also reported at the time, the proportion of observed northbound drivers whose speed was 55 mph or faster fell 68 percent during the construction work: from about 10 drivers per 10,000 to about 3. This was based on electronic devices that detected Bluetooth signals as they passed two different points on the roadway, two miles apart.

But ODOT spokesman Don Hamilton said Thursday that ODOT’s usual method of measuring travel speed is to measure exact speed at a single location, so the Bluetooth travel time data couldn’t be used to draw conclusions about speed patterns.

“You take it from a single point, not between two,” Hamilton said.

Hamilton also said that speed data is “not accurate in an area where there is significant construction” because he believes people slow down in construction zones even without any changes to passing lanes, speed limits or enforcement. Speed data captured from a sample of cars on Barbur Boulevard last summer showed a big drop in extreme speeding during the construction project, even though average travel times were unaffected except during rush hour.
(Click for data)

Susan Hanson, ODOT’s interim community affairs manager, said Wednesday that “more research” about safety would be needed “when this is discussed more broadly.”

She suggested it would be unlikely for ODOT to discuss changes to Barbur Boulevard more broadly except in the context of the Southwest Corridor Plan, which isn’t expected to result in any construction until 2021 at the soonest. This long-term plan to add rail or bus lanes on Barbur is fiercely opposed by public transit opponents in other cities, who have so far passed two ballot issues designed to stall or block the idea.

Hanson said that although this stretch of Barbur Boulevard sits within Portland city limits, the agency will not redesign the road without the agreement of other nearby cities.

She said that’s because it is a freight route that runs parallel to Interstate 5. Therefore, Hanson said, Barbur functions as “a seismic lifeline if I-5 goes down” and also as spillover in the case of major crashes on Interstate 5.

Some improvements made for biking and walking Also at Wednesday’s meeting, ODOT Transit and Active Transportation Liaison Jessica Horning discussed the agency’s efforts to improve sidewalks, and crosswalks and incomplete bike lanes up and down Barbur. Within the two-mile stretch in question, the agency has recently added flashing “bikes on roadway” beacons and a green-painted bike lane where Barbur meets Capitol Highway.

In 2012, the state also added a crossing beacon near the site of the 2010 fatality of a woman walking a bicycle.

The Facebook profile photo of Angela
Burke, 26, killed by a speeding driver
in 2010 while walking her bike across
Barbur to her apartment building.

The other five people killed on this two-mile stretch of Barbur since 2009 were in cars and on a motorcycle.

The Bicycle Transportation Alliance has circulated a petition to request that ODOT restripe this two-mile stretch of Barbur to remove a northbound passing lane and instead add protected bike lanes and walking paths on each side.

At Wednesday’s meeting, Kiel Johnson of the neighborhood advocacy group Friends of Barbur asked Mai how many collisions would be required before ODOT considers restriping Barbur immediately.

“Our traffic safety group would have to answer that kind of question,” Mai replied. “That’s not something that we work with enough to say.”

The post State says it has no plans to restripe street where one person has died per year appeared first on BikePortland.org.