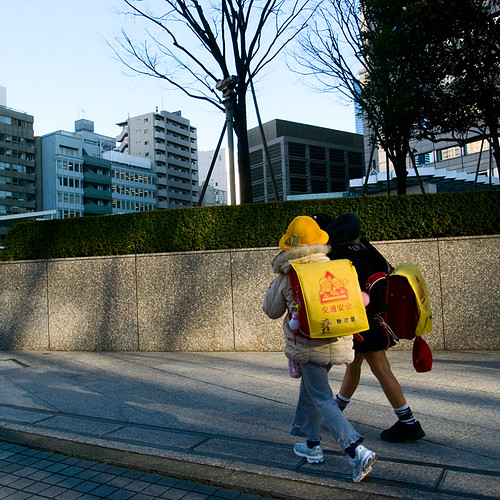 Somebody call the cops.
(Photo: browneyes.)

This week’s Monday Roundup is brought to you by the Ride the Heart of the Valley Bike Ride. Set for April 26th, this ride is a benefit for the Oregon State University College of Veterinary Medicine and the Boys and Girls Club of Corvallis.

Here are the bike-related stories from around the world that caught our eyes this week:

Illegal walking: Child protective services threatened to take two Maryland children away from their parents after the parents let their kids (aged 10 and 6) walk home one mile from the park together.

Ambulance bike racks: A hospital in Fort Collins now equips its ambulances with racks to avoid leaving patients’ bikes at the scene.

Gentle music: You can now listen to a version of Mambo No. 5 performed entirely by bike horn.

Global retrofit: There’s an international plan afoot to spend $90 trillion to redesign almost every city in the world for even more driving. Al Gore and the former president of Mexico are arguing that this would be a bad idea but are being mocked for it.

Car-shaped bike: My favorite analysis of a Detroit Auto Show demo vehicle: if your bike is too light, agile and convenient, the U.S. auto industry has you covered.

Allowing speeding: The political battle over the mechanization of streets and the invention of “jaywalking” came to its climax in Cincinnati in 1923, when auto dealers united against a mechanically enforced 25 mph speed limit and left us with posted signs instead.

Institutionalized speeding: The U.S. engineering practice of deliberately designing our roads for comfortably driving much faster than the speed limit, in the name of “safety,” apparently comes from one 1964 study.

Investigating speed: U.S. Rep. Peter DeFazio (D-Ore.) has asked for a GAO investigation of whether federal standards that make it safer to drive fast are also making it more dangerous to bike and walk.

Yes we can: The NYC Transportation Commissioner’s frequent line that “culture eats policy for breakfast” is self-defeating, argues Brooklyn Spoke. Cities can change the menu.

Lane-change collision: A Hillsboro man who changed lanes to pass someone biking accidentally accelerated into another car for a head-on collision Saturday.

Selective enforcement: A new law in Fort Lauderdale requiring bikes to be licensed turned out to be “a law that’s only being used in black neighborhoods.”

Transpo futurism: CityLab has compiled its posts about the future of transportation into a free e-book, its first.

Ridesourcing benefit: Uber claims that a planned expansion in Europe would take 400,000 personal vehicles off the road.

Inclusionary zoning: A much-anticipated bill that could let Portland and other cities require income diversity in new developments has been introduced in Salem.

Felony DUI: In Olympia, a bill would elevate someone’s fourth DUI conviction in 10 years into a felony.

Seahawk joyride: Seahawks defensive end Michael Bennett says he has three bikes at his house and rides regularly, though the trip he took down the field right after winning a trip to the Super Bowl was his favorite so far.

Mixed dating: How do people who arrive at dates in cars ever get laid? Lovely Bicycle explains.

Finally, your video of the week is an artsy account of an alternative scenario. (For a slightly more narrative approach, here’s the original column.)