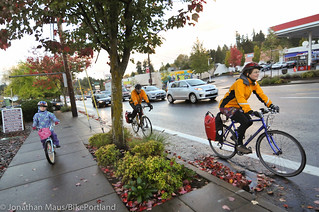 The second week of February (9-13) will be Southwest Portland Week here on BikePortland.

That entire week, News Editor Michael Andersen and I will be stationed in a secret bunker (probably a pub or coffee shop in Multnomah Village) where we’ll focus our editorial output on the issues, projects, businesses, and people of southwest Portland.

If you recall our East Portland Week last summer, you’ll have some idea of what to expect. The basic idea with these focused coverage events is to open our eyes to places that we don’t cover — or physically inhabit — as often as we’d like to. Sure, we have sources all over the region and we can cover places we never visit; but it’s just the not the same as being there.

Being in a new part of the city opens us up to new perspectives and it makes our reporting better. We learned a lot about East Portland that not only influenced the 10 stories we published that week, but that still permeates our work today. We hope to do the same in southwest Portland.

And it’s a good time to be headed out that way.

From an infrastructure perspective, the issue of whether or not the state will tame SW Barbur Blvd recently took an interesting turn. Meanwhile, a few streets over, the City of Portland recently installed a new protected bike lane.

Some of our coverage will surely focus on the many amazing volunteer advocates this part of the city has produced. Names like Don Baack, Roger Averbeck, Marianne Fitzgerald, Keith Liden, and many others all hail from southwest Portland and have their fingerprints all over its active transportation ecosystem. Another person we hope to talk with during Southwest Portland Week is City Commissioner Steve Novick. He not only lives in the area, he’s also in charge of the Bureau of Transportation. And of course we’ll be seeking out regular, everyday bike riders too. Any southwest readers out there feel like being the subject of a Ride Along?

And what about bike businesses in southwest? Did you know that Western Bikeworks is opening a huge new store in Tigard? We’ll get the full scoop next month.

If you have ideas on stories we should cover, places we should visit, or people we should talk to while we’re in southwest Portland, please drop us a line.

The post Get ready for Southwest Portland Week! appeared first on BikePortland.org.