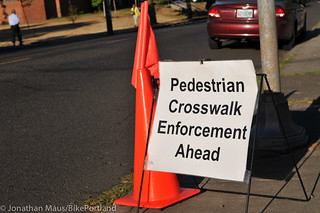 While everyone likes to argue about which type of roads users break more laws — and we are currently being forced to have the tired debate all over again thanks to a well-intentioned but misguided legislative concept — the Portland Bureau of Transportation is doing their part to address the issue.

PBOT’s Crosswalk Enforcement Action program has been going strong since 2005. We checked in on one back in September and have reported on them many times over the years. The idea is simple: Place a human decoy (sometimes a notable politician but more often PBOT safety staffer Sharon White) in a crosswalk and wait for people to break the law while a phalanx of Portland Police motorcycle officers wait in the wings, armed with radar guns and quick twists of the throttle to chase people down.

The efforts are usually quite fruitful and they offer us a small window into the rampant disregard many road users have for the law.

According to PBOT records, in 11 separate crosswalk enforcement actions in 2014, the police pulled over 319 people (most of the actions last 1-2 hours). Of those traffic stops, 251 people were given citations and 68 others received warnings. The vast majority of the citations were written for violation of Oregon’s crosswalk law (ORS 811.028 a.k.a. “failure to stop and stay stopped for a pedestrian”). The other most common violations are use of a cell phone, speeding, not using a seatbelt, and so on.

PBOT doesn’t keep track of what type of vehicle people were operating, but given the volume of biking and driving on these streets and what I’ve seen at these events first-hand, the vast majority of the citations go to drivers. At their most recent enforcement action, which took place on December 16th at E Burnside and 24th, the Portland Police handed out 42 violations in just 1.5 hours. Here’s the breakdown (via PBOT): 22 Fail to Stop and Remain Stopped for Pedestrian, 2 Passing a vehicle stopped at a crosswalk, 5 Lighting violation, 3 Cellphone, 2 License violation, 2 Failure to obey traffic control device, 2 Expired tags, 1 Fail to drive in lane, 1 Proof of insurance, 1 Seatbelt, 1 U-turn.

Think that one’s bad? On June 27th, 2014, an action at SE Powell and 31st resulted in 55 citations. Here’s the breakdown of their haul that day: 45 failure to stop and remain stopped for a pedestrian, 2 failure to carry proof insurance, 2 speeding, 1 DWS, 2 failure to use seatbelt, 9 cell phone violation.

Yikes! This is a huge problem! If we just required everyone to get a license, get tested on the rules of the road, and have their vehicles registered with the State of Oregon this would whole problem would go away! (That was a joke.)

And what makes this more amazing is that PBOT actually broadcasts the locations ahead of time both via media statements and on the road with signage alerting people that a special enforcement zone lies ahead.

Today PBOT and their partners at PPB are headed out to SW Capitol Highway and Miles for this year’s first enforcement action. They’ll be there from 1:00 to 2:30. According to PBOT, This location was chosen “at the request of the community, which has been active in educating and encouraging drivers to be alert, aware and slow down.”

— See a recap of every enforcement action since 2005 via this PBOT document.