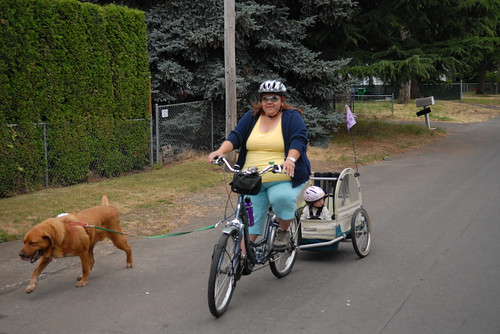 Not a crime, in case you were wondering.
(Photo by J. Maus/BikePortland)

Welcome to the latest installment of Ask BikePortland. Browse past questions here.

Portland is a perennial front-runner in national rankings of top bike cities, and the same goes for dogs. We love them both. But what happens when you demonstrate affection for pedaling and pooches at the same time?

Reader Nastassja P. had an experience recently that left her wondering if riding with a dog on a leash is legal. She emailed us her experience and asked the question:

“We were on Lincoln St on about SE 36th/37th heading west at about 7:30am. We were well within the lines established by the white biker image painted on the ground [a sharrow, Lincoln is a bike boulevard]. I was just riding along, my dog Oso to the right of me (very close to the parked cars), on his walky-doggy, and weren’t going super slow – he was definitely running.

Lady in a sedan with 3 kids in it, drove by (going the same direction as me) and slowed down and rolled down her window, leaned over the front seat so her head was nearly out the side of the passenger window and yelled “You cannot be on the road with your dog!” and pointed/waived her finger at me, and then zoomed off. I had no time to say anything back.

Oso and I have been biking together from the beginning. He’s quite behaved and stops at stop lights and knows his right and left, and is quite good at drinking out of the water bottle as well. I like to take him to work with me at least one day a week. For the most part, I get smiles, but today was the first time that someone just seemed outright pissed to witness such a site.

I’m wondering, is there a law prohibiting biking with dogs? Or how do others feel about this?”

We asked Charley Gee of Swanson, Thomas, Coon & Newton for an answer. He said the closest thing in the Oregon Revised Statutes that would even remotely apply would be 814.450: “Unlawful load on bicycle.” But that law only deals with carrying the load, not on something attached and running alongside you. (And for reference, it doesn’t prohibit you from carrying a dog in a bag or basket, unless it, “prevents the person from keeping at least one hand upon the handlebar and having full control at all times.”

That means this is legal: 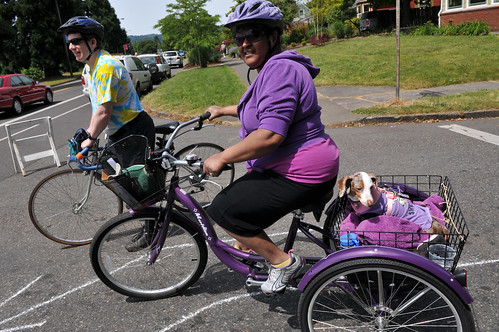 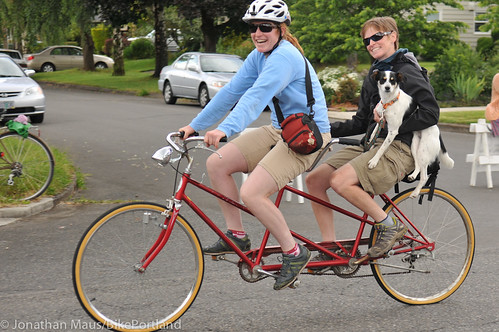 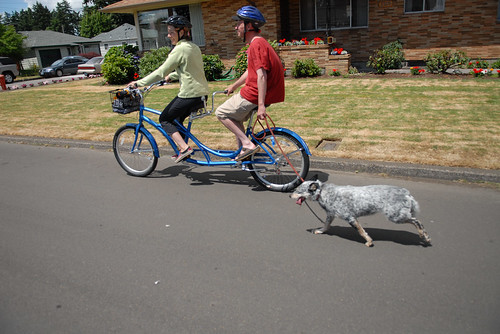 To keep both hands on your bars and have your dog run with you while doing so, get one of these doggie-walker thingeys like Nastassja has: Oso and his bike leash.
(Photo by Rick Olson)

Going back to Nastassja’s question, no, it’s not illegal to bike with your dog running alongside. However, Gee also pointed out that Careless Driving could be applied if the presence of the dog distracted you or caused you to do something that led to a collision with another road user.

You might recall back in 2011 when a woman became distracted with her dog in the back seat of her car while driving and swerved and struck a man who was biking on SW Multnomah. In that case the driver was issued a citation for Careless Driving with injury to a vulnerable road user (ORS 811.135).

So go ahead, ride with your dog all you’d like. Just make sure those big, cute puppy eyes don’t distract you from safely navigating the road ahead.

The post Ask BikePortland: Is it legal to ride with my dog? appeared first on BikePortland.org.