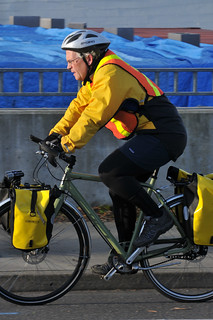 Mandatory high-viz: A bill requiring every bike user to wear reflective neon and carry a government ID has attracted six co-sponsors in the Wyoming legislature.

PR campaign: The phrase “American love affair with the automobile” dates to a 1961 TV program. Underwritten by the auto industry and narrated by Groucho Marx, it framed the then-controversial demolition of neighborhoods to make way for freeways and parking lots as the normal challenges of marriage.

Normalized danger: “You press a pedal and two tons of metal lurches down the city avenue; you pull a trigger and twenty enemies die; you waggle a button and cities burn,” reflects Adam Gopnik, who recently learned to drive at age 58. But zooming in concert down a road is also “civilization itself.”

What could go wrong? Tesla’s new electric sports car has an “insane” button that lets you accelerate from 0 to 60 in three seconds.

Responsibility claimed: Nobody else in the media seems to be reporting this yet, but Seattle’s mysterious decision to throw the ball across the one-yard line last night has been explained:

REPEAL YOUR HELMET LAW, SEATTLE, OR FEEL OUR WRATH AGAIN.

Coincidence? According to this masterpiece of a pregame BuzzFeed post, Seahawks lineman Michael “I bike all the time” Bennett had the 7th nicest butt out of 48 in the Super Bowl.

Gas-tax rebuttal: Don’t raise the gas tax to keep up with inflation, say the Koch brothers. The real problem is “projects that have nothing to do with roads, like bike paths and transit.”

London bikeway: Mayor Boris Johnson has retreated slightly from a plan that would have added 16 minutes to driving times in order to build a six-mile bidirectional protected bike lane through London’s central city. It’s down to six minutes’ delay after narrowing the lane to 5 feet wide in a few spots.

Desert highway: The Adventure Cycling Association is asking for help getting bike access on Interstate 40 between Needles and Barstow, Calif.

Bike share equity: A Philadelphia-based project is setting out to incubate and spread the best practices for making bike sharing more useful to marginalized folks.

Two approaches: How much imperfection are you willing to settle for? That’s the difference between an incrementalist and a completionist.

Car-free bridge boom: Ten years ago, it was rare for a new bridge in the U.S. to even include bike lanes. Now the age of the biking-walking bridge has arrived.

Bike-detecting cars: The front seat of Jaguar’s experimental “Bike Sense” car will reach forward and tap you on the shoulder to let you know if someone is pedaling up behind you.

Importing pollution: As California’s standards for truck emissions tighten, the owners of 350,000 high-pollution diesel rigs are looking to sell them, with Oregon as a top target.

Waterfront trail: West Vancouver’s path along the Columbia is repaired after four years of work.

Lifetime sport: Almost 90 years after fleeing pre-Depression Oregon, Octavio Orduno has died: “the oldest cyclist in Long Beach, if not the world.” He was 106.

And your video of the week is a bicycle-powered snowplow designed by a man in Lincoln, Nebraska: