The Portland Bureau of Transportation has finished some striping and marking work on NE 7th in the Lloyd District.

As we shared in our first report on this project back in September, this street is a key connector for bicycling between the Lloyd District (and NE Multnomah protected bike lane) and the NE Tillamook bicycle boulevard. This project was aimed at improving the bicycling environment by giving riders dedicated space and reinforcing a shared street environment.

In the southbound direction, the new markings begin just south of NE Schulyer. It begins as a standard bike lane and then half-way through the block (right at Les Schwab Tire Center driveway) the bike lane ends and a shared right-turn lane begins (marked by alternating sharrows and turn arrows). 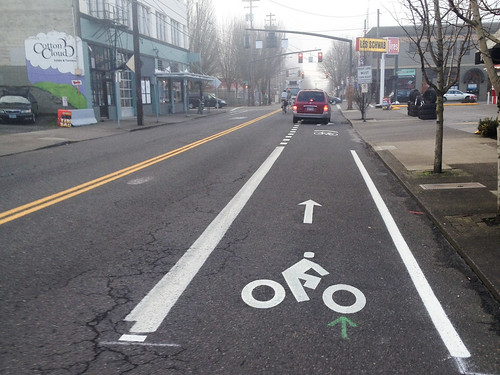 I observed the new markings during the morning rush-hour a few days ago. In the case below, the bike riders opted to not share the lane and instead merged into the left lane in order to continue south… 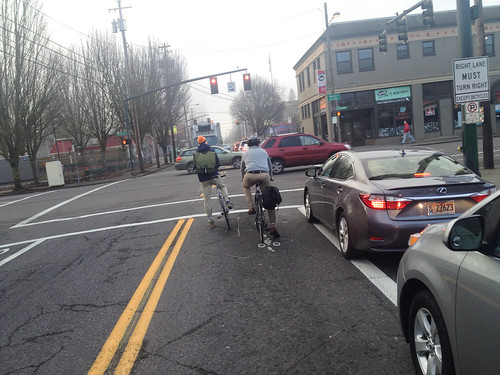 Continuing southbound, between Broadway and Weidler, there doesn’t appear to be much sharing going on. Instead, there was more of an awkward squeeze happening when road users in cars and on bikes attempted to create their own, separate lanes… 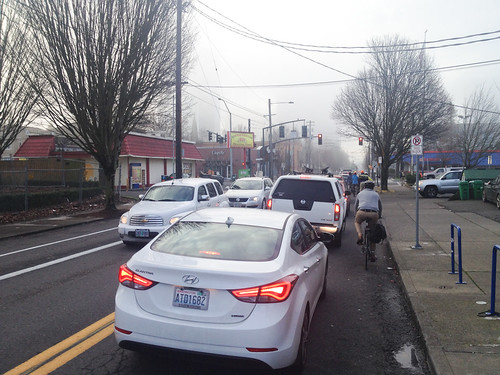 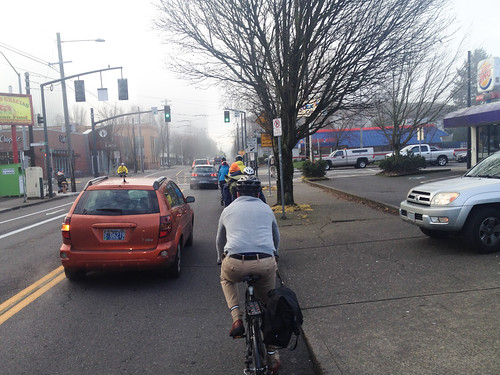 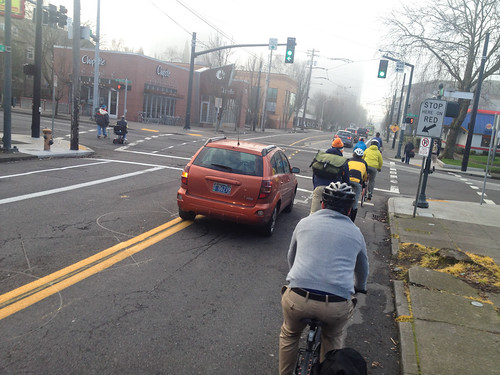 The situation above might have something to do with the fact that PBOT has only installed one sharrow on this entire block face. The plans call for two. Even so, sharrows have only very limited effectiveness and most road users either ignore them or don’t know what they mean.

In the northbound direction, the new bike lane looks well and was working fine… 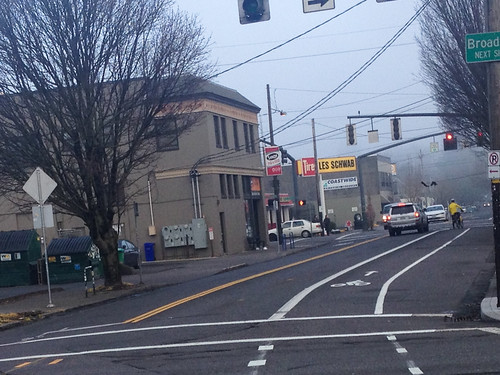 The plans we shared in September showed the inclusion of a green bike box/left turn box on NE Broadway, but that was dropped from the final plans (I’ve asked PBOT for a clarification).

As we previously reported, these new bike access improvements still do not connect directly to Tillamook. This project stops 2-3 blocks south of Tillamook. The PBOT project manager tells us that’s because, “The road simply gets too narrow and in order to make room for a bikeway they’d have to take out trees and a planting strip.” (And an auto parking lane.)

This project was paid for with Lloyd District parking meter revenue.

Have you ridden the new bike lane or the new sharrow-marked lane? Has it made NE 7th better? Let us know what you think.