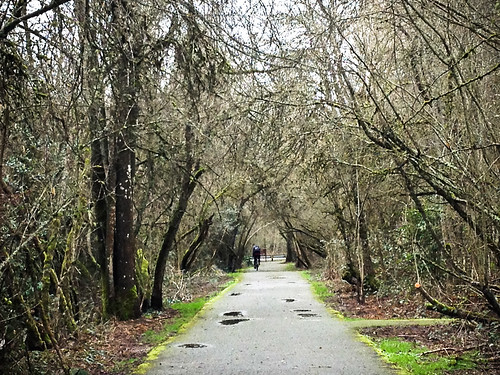 The Fanno Creek Trail near Garden Home is not too shabby.
(Photos J. Maus/BikePortland)

This post is part of our Southwest Portland Week.

It’s been a great week out here in southwest Portland. We’re learning a lot and enjoying the experience of being in a new place with new roads to explore and unique bicycling issues at play. I’ve gotten behind on my daily photo essays, so here’s the one from my ride on Tuesday.

Each day this week, I’m trying to ride to and from southwest on a different route. Tuesday morning I opted for one of the most scenic and low-stress ways to go from downtown Portland to southwest: Washington Park. Yes, it has a significant climb (2.3 miles and about 600 feet elevation gain), but if that isn’t a barrier to you, than this is a great way to go. (For more on commuting through Washington Park, re-read my Ride Along with Stasia Honnold.)

Here’s where my explorations took me on Tuesday… See the route on RideWithGPS.com.

I wound through northwest Portland to 24th and then found my way to the bike lane on NW 24th Place. (Note that this street is one-way for drivers and two-way for bikers.) 24th Place is a great connection that leads directly to signalized crosswalks on W Burnside that take you right into Washington Park. As you enter the park from this location, you’re treated to narrow paths that wind through a forest so impressive it’s hard to believe you’re just a few tenths of a mile from the heart of downtown Portland. 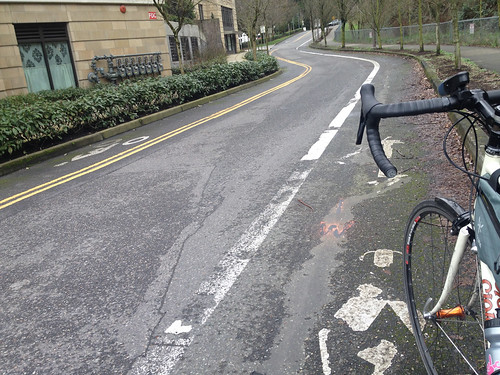 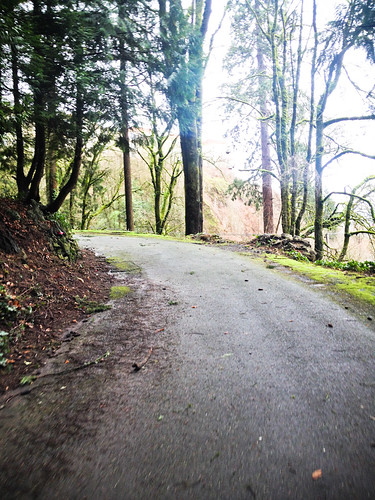 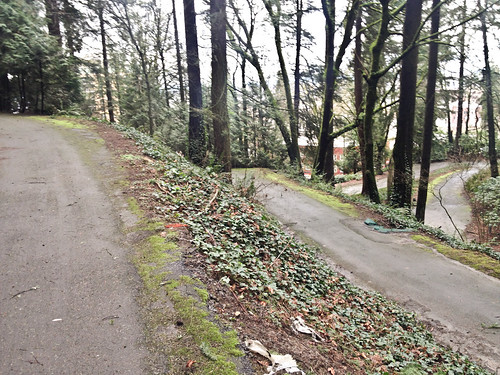 As I pedaled up toward the International Rose Test Garden I caught a whiff of something amazing. I think it was this gorgeous Chinese Papertree (Edgeworthia Chrysantha, according to a plaque at its base)… 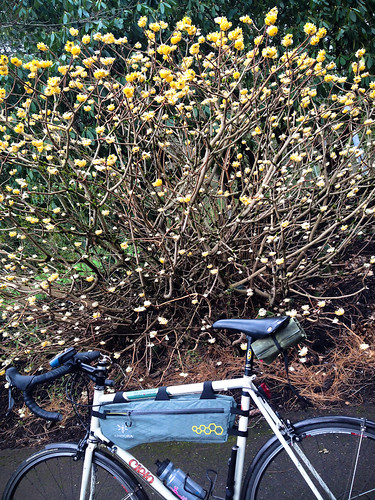 The route through the Zoo and Children’s Museum parking lot has a bike lane and is relatively easy to figure out. I then used SW Canyon Court to connect to the shared path that leads up to the Sylan/Highway 26 intersection. From there I headed south over the freeway and then connected to SW Raab Road. (From this point on, all the roads were new to me.) 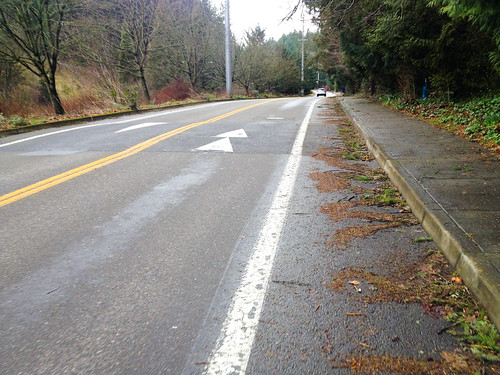 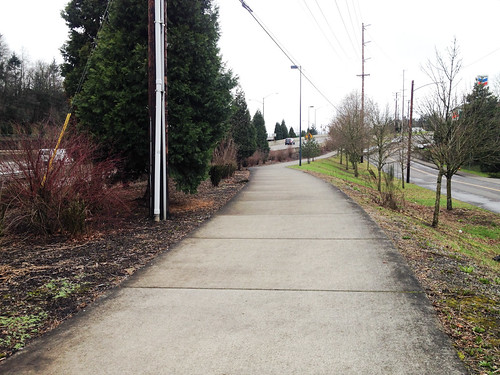 Biking/walking path leading up to Sylvan. 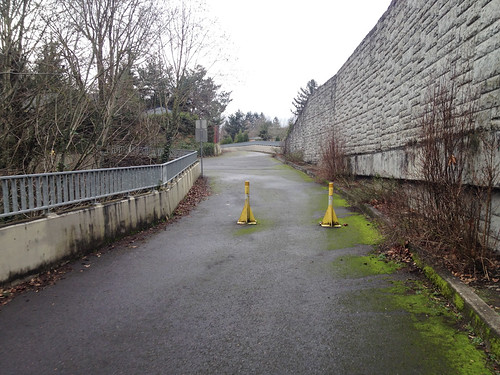 From Canyon, I needed to head south to connect to Scholls Ferry Rd. Since I don’t know the roads out here, I’ve been using a PBOT bike map a lot. That map told me that 87th/Birchwood/Laurelwood was the best ticket to Scholls. Those streets were OK. The traffic volume was low, but like so many neighborhood streets in southwest, there was no shoulder or bike lane. There are speed humps, which is nice, but I can’t figure out why they use this checkered pattern. If you want the humps to slow people down, why make them look like a finish line? 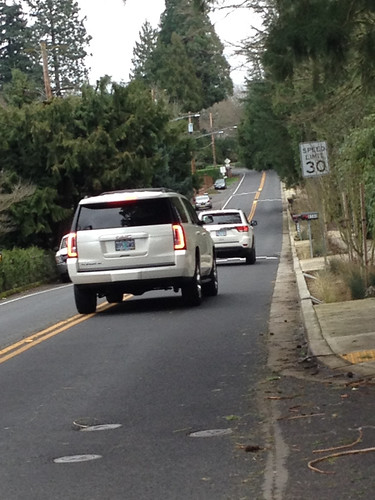 Not much room… and this is the recommended bike route! 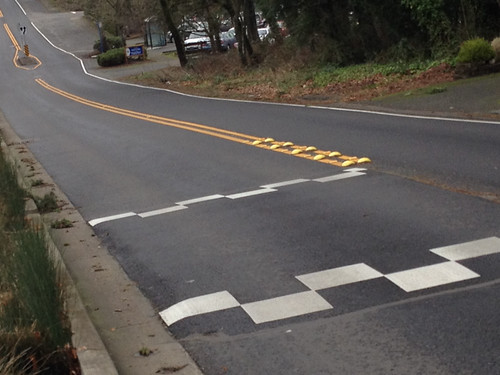 I don’t know about you, but when I see checkers, I speed up!

At the Scholls Ferry intersection, I saw a woman walking her bike to an ATM machine. I was curious to talk with her because there’s very little social cycling out here and most every bike trip I’ve observed is a serious commuter going from home-to-work or back. I met Karina and learned that she was biking because she “totaled” her car. Her bike, which is now her main form of transportation, needed to be fixed and she was walking it to a nearby bike shop (Bike N Hike). Karina is new to cycling, but she seems to be finding her way. “The cars make me really nervous, and the bike lanes cut in and out,” she said, “but I’m learning how to do it and using Google Maps on my phone has helped me find routes off the main streets.” 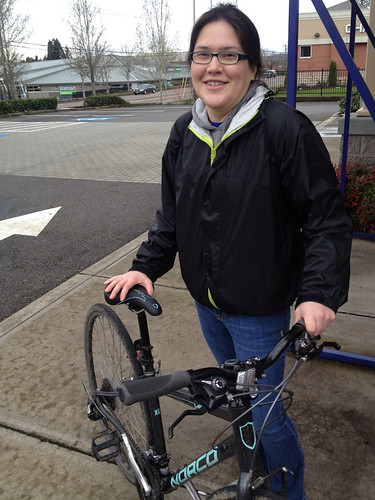 Using SW 86th was a great way to connect to the Fanno Creek Trail in Garden Home. The entry I wanted was closed due to construction. One of the workers saw me and said, “There sure are a lot of people using this trail, I didn’t realize it was so popular.” Yep. 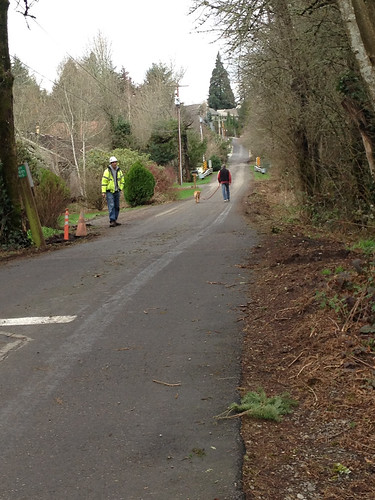 SW 86th is a perfect connection to the Fanno Creek path. 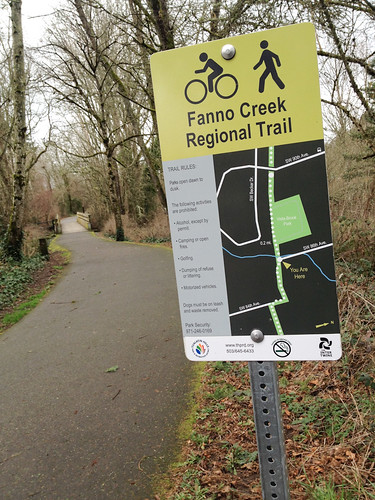 This section of the Fanno Creek Trail is really beautiful. The contours, creeks, and trees transport you to another place and it’s the polar opposite of the high-speed, high-stress conditions on the main roads. The path itself is pretty narrow and it can quickly feel crowded when a lot of people are out and about. Another thing I noticed was a very poor gate where the path crosses SW 90th. It didn’t feel ADA compatible and I would hate to see a big family bike with a trailer or cargo bike try and squeeze through. 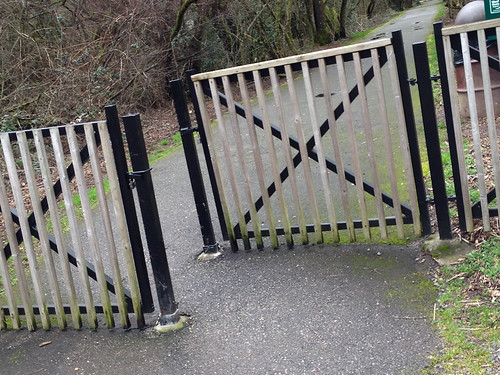 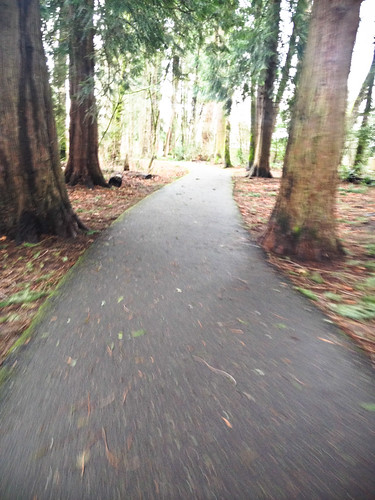 Continuing east I found my way onto SW Multnomah Blvd and took it all the way to I-5. Multnomah is a key east-west street in southwest. It’s flat and straight and it connects major destinations. West of the new protected bike lane (which starts at Capitol Hwy), bicycle riders have only a standard, 4-5 bike lane. Sight lines here are long and there are no signals or stops, which means drivers tend to go pretty fast. This stretch between 69th and Capitol Hwy really needs a buffer and some sort of protection. 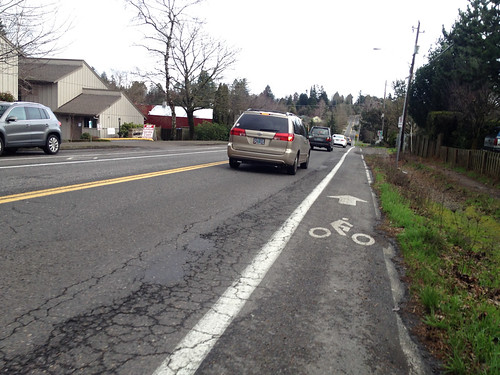 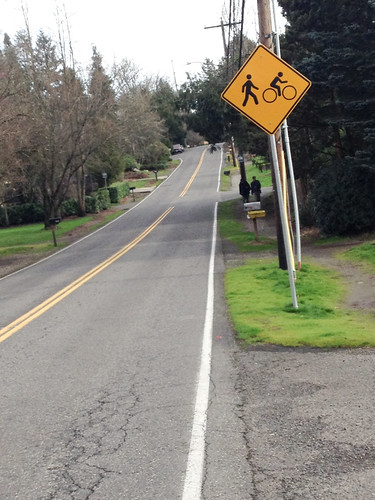 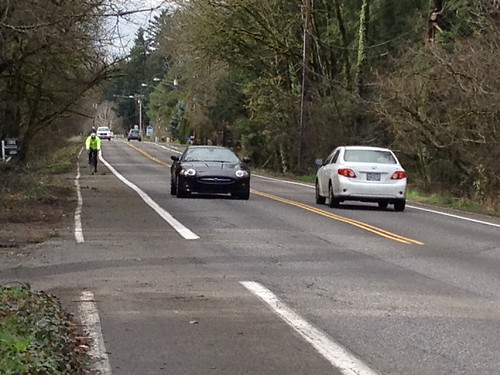 Multnomah bike lanes could be better. 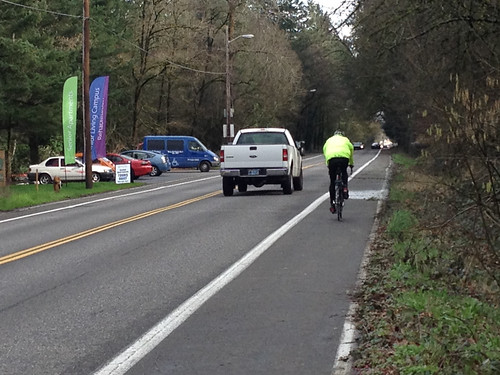 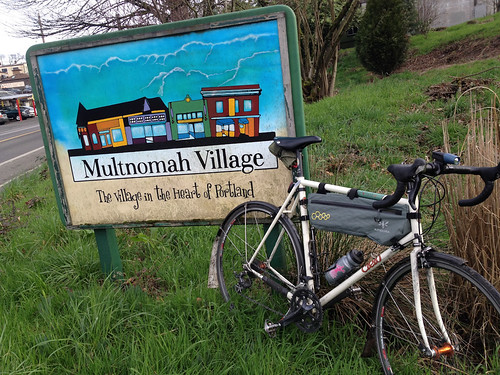 This was my first time on the new protected bike lane on Multnomah. The eastbound direction puts you up on a sidewalk. It feels safe, but on a busier summer day I could see it being crowded with bikers and walkers. It might need some pavement markings to delineate the space a bit better. 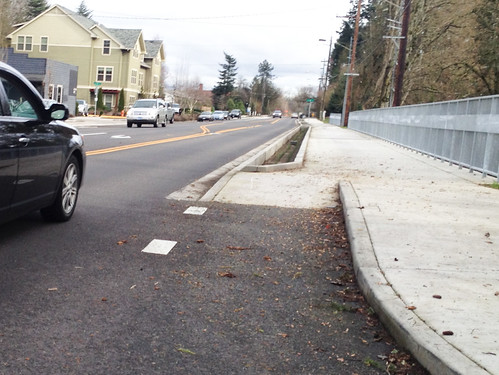 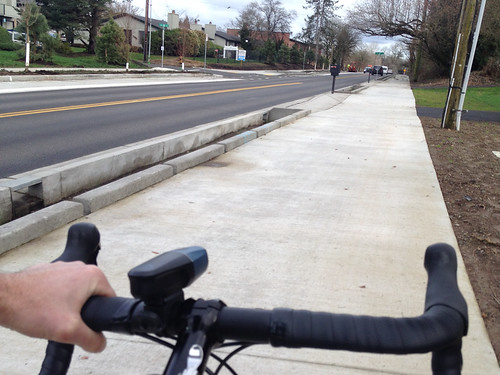 As I continued east to connect to Terwilliger, I followed the Multnomah bike lane under I-5. As it led me north I felt like I had made a wrong turn. The bike lane started to feel like a freeway shoulder and it wasn’t until I saw a bike lane symbol and re-checked my map that I realized I was indeed headed the right way. That’s what it’s like out here: One minute you can be on a shiny new protected bikeway, and the next minute you’re on a freeway shoulder. 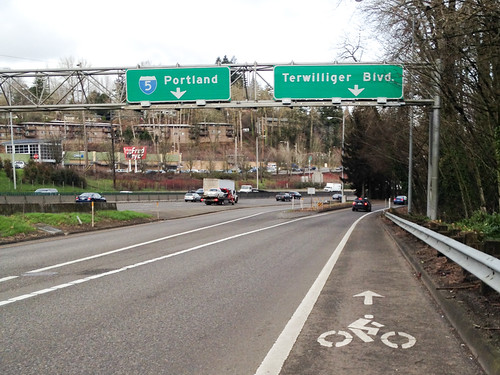 A bit unnerving the first time through.

Hope you’re enjoying our Southwest coverage. There’s much more to come. More photo essays, a Ride Along, an interview with Commissioner Novick, profiles of local bike shops, and more!? And remember, this week isn’t the end of us covering this part of town — it’s the beginning! We are focusing out here to give us a stronger foundation for future reporting.

We’ll be here in Southwest all week. And join us Friday afternoon for a BikePortland Get Together and social hour at the Lucky Labrador Public House in Multnomah Village (7675 SW Capitol Hwy) from 4:00 – 6:30pm.