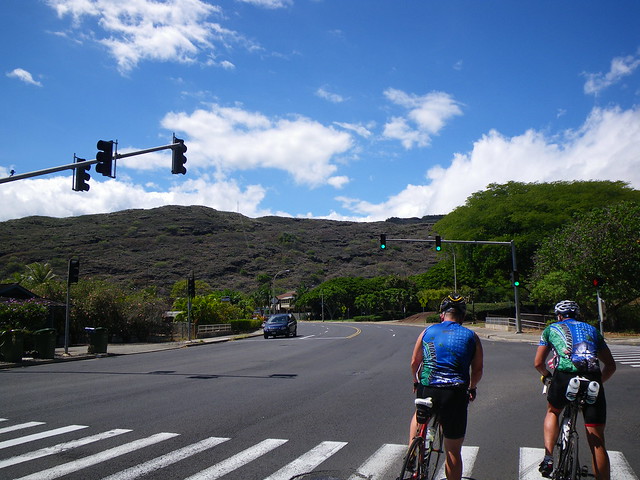 No-fault injuries: A bill in Hawaii’s legislature would prohibit personal liability insurance payments to anyone who hit by a car while bicycling.

Mandatory high-viz: Following Wyoming’s tracks, South Dakota is considering a law to make it a misdemeanor to bike on any public roadway without wearing “fluorescent or reflective garments.”

Mandatory helmets: A bill in California would require all adults to wear helmets while biking.

Federal gap: Republicans and Democrats agree that they need transportation money, but there are two problems: conservatives don’t want a penny for walking, biking or transit; and few are willing to talk about how to fund it.

All-ages bikeways: A British web survey found that 33 percent of adults think it’s appropriate to ride with an eight-year-old in a painted bike lane, while 80 percent approve of doing so in a curb-separated bike lane.

Texas milestone: The latest city to get a downtown protected bike lane: Houston.

Parking removal: Seattle’s push for better bike and bus lanes is crossing a long-avoided line: it’s removing curbside parking spaces. Leaders are framing it as part of the city “growing up.”

Seattle safety: Seattle has launched a Vision Zero plan, with a hard target of 2030 for eliminating traffic deaths.

Standardizing buffers: In a major shift of direction, the Florida Department of Transportation has endorsed 10-foot-wide lanes on urban arterials and made 2 to 3-foot hatched buffers standard for all urban bike lanes.

Livability PAC: Some Dallas residents have launched a political action committee to destroy a freeway.

Young-adult suburbs: Increasingly priced out of the cities their older siblings helped popularize, millennials are moving to suburbs in large numbers, and the ones with walkable, bikeable grids may have a leg up.

Urban disease: Stephen Corwin writes that driving is like smoking — fun in the beginning, eventually routine — but Los Angeles isn’t just addicted: it has cancer.

And in your video of the week (via Streetsblog USA), the Russian “Stop a Douchebag movement” is a group of men who force people to stop driving on the sidewalk and sometimes get loaded guns pointed at them for it: