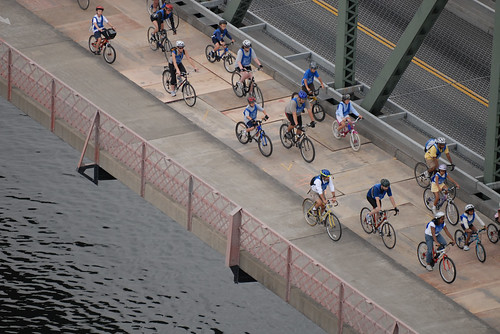 How about a real lane for bicycling on the Hawthorne?
(Photo by J. Maus/BikePortland)

Multnomah County wants your big ideas for how to improve travel across their six Willamette River Bridges. They’ve released a draft 20-year Capital Improvement Plan that will prioritize the major projects and funding to maintain and rehab the Broadway, Burnside, Hawthorne, Morrison, Sauvie Island and Sellwood Bridges.

If you bike in Portland, you know how important these bridges are to the bicycle network.

When I asked County spokesperson Mike Pullen how bicycling improvements fit into this plan, he said, “Often, the projects that bicyclists are interested in cost much less than that and we try to fund them through our maintenance budget.” Now, I know Pullen. He’s a good guy. But I have a hunch that some of you might actually have bigger ideas than a bit of paint here or a sign there. Like, how about finally getting a real, protected bike lane on the Burnside. Or how about widening the paths on the Broadway Bridge?

The projects in the draft plan are limited in detail, but some of them include elements that would impact/improve bicycle access. They include better lighting on the Hawthorne, Morrison, and Broadway, and improved signage on the Hawthorne.

In total, the 20-year plan includes 53 projects worth about $1.3 billion. One of the most expensive projects on the list is the 2016 Burnside Rehabilitation Project which is has a “target cost” of $30.8 million.

You can see the draft plan and take a survey at the Multnomah County Bridge Plan website. The survey will only be open until February 26th, so make sure to get your comments in. The County will officially adopt the final bridge plan as part of their Transportation Capital Improvement Plan in May.