Because of a bad design coupled with dangerous and illegal behavior by some road users,
PBOT will move the bike lane over and add a median island at Williams and Stanton.
(Photo by J. Maus/BikePortland)

The “three-year journey” (to use the City of Portland’s phrase) to make North Williams Avenue work better for cycling isn’t quite over yet.

Even though they announced a month ago that construction on the project was all but complete, we’ve heard consistent concerns about three intersections in particular: Stanton, Cook, and Fremont. The good news is they’re working to address those trouble spots.

Last week I spotted the spray-painted lines of a re-positioned bike lane and a new median island at Stanton, so I inquired with PBOT Project Manager Rich Newlands to see if anything was up. Sure enough, he confirmed that a relatively major change is coming to that intersection, as well as more minor tweaks to the two other intersections.

Williams and Stanton (at Dawson Park) Notice the word “island” near the bike lane character.
(Photo by J. Maus/BikePortland)

We’ve already reported about the issues at this intersection. The problem here is that PBOT has not made it clear enough to road users that the left lane leading up to the intersection (prior to an existing median at N Graham) is left-turn only. Because there is zero signage or markings to that effect, many people use the lane illegally and with no intention of making the left turn at Stanton. As a result, they sit in the lane and try to merge back into the single standard travel lane to continue north. Instead of waiting to merge, some people simply drive in the bike-only lane. The other problem is that the bike lane at Stanton veers too drastically the right (in order to preserve room for an auto-parking lane adjacent to Dawson Park). This jog in the bike lane puts riders in the direct path of people illegally attempting to merge with their cars into the right lane. 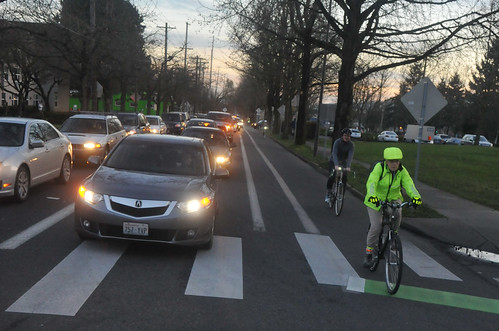 All the cars in the left lane here are in violation of the law, but they might not even know it because there’s such a lack of signage.
(Photo by J. Maus/BikePortland)

To fix this problem, PBOT is planning two things: They’ll re-stripe the bike lane so it doesn’t jog so much to the right and they’ll install a new median island. Newlands says the island aims to, “prevent right merging traffic from using the bike lane for merge space.” The new island will be similar to the existing ones in the left one between Beech and Skidmore.

In addition, PBOT plans on adding more signage prior to the existing median at Graham in order to “send a stronger message” (says Newslands) that the left lane is for left turns only. There will be two, “Thru Traffic Merge Right” signs and two, “Left Lane Must Turn Left” signs. The Cook intersection has been a mess for months now. This is a major feeder of Williams traffic thanks to it being an outlet from Interstate 405. There was a delay in getting a new traffic signal up and running, and the new bike lane here is just five feet wide — the most narrow of anywhere else in the project. Add in the constant stress of nearby construction and the fact that the bike lane is sandwiched between two standard lanes and it doesn’t feel like much of an improvement over the old design.

To help bulk up the bike lane here, PBOT plans to add some green paint. This is the block face (between Ivy and Fremont) adjacent to New Seasons Market. It’s a very busy area, and once again the new design requires people using cars to cross over the bikeway to access a left-turn pocket to go west at Fremont. Back in December there was a collision in this location.

According to their design drawings, PBOT plans to add green paint to the entire bike lane from Ivy to Fremont.

All of these changes should be completed by the end of this week. Let us know how they work for you and we’ll keep sending feedback to PBOT until we get this right.