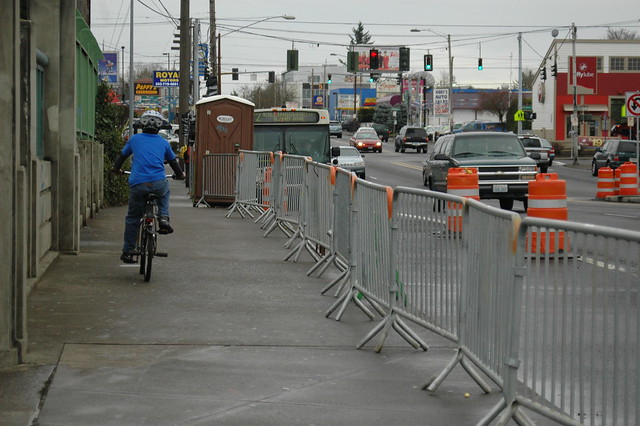 82nd Avenue: a priority, but how high?
(Photo: Elly Blue)

As Oregon creates its first-ever comprehensive biking and walking wishlist, it’s run into a hard question: how should it rank the importance of the many projects on its list?

The question comes three years after a round of ODOT’s federal grant applications for Portland-area biking and walking projects came up completely empty. As the next federal grant deadline approaches, ODOT is hoping that by creating a more sophisticated system to choose its top projects — a complete sidewalk along 82nd Avenue, maybe, or a crosswalk beacon on North Lombard street — it won’t miss out on the next round of federal grants.

Applications for the next grant cycle, which will fund projects in the years 2018-2021, are due this August.

“I think this is going to bring active transportation on par with our other systems,” ODOT Active Transportation Liaison Jessica Horning said Thursday. “We’ve had a pavement management system in place for years.”

Horning and project manager Karla Kingsley of Kittleson and Associates presented their work so far at the Portland Bureau of Transportation’s free “lunch and learn” seminar at City Hall on Thursday. They shared a list of considerations used by a similar project in Washington County: And a second list, of the seven criteria that have tentatively been selected by ODOT’s committees as the most important: But ODOT hasn’t yet figured out how to weigh those factors against each other, or whether other factors deserve top billing too. Next month the agency plans to hold an online “virtual open house” to ask for advice on how to do so. To sign up for email updates, contact Horning: jessica.horning@odot.state.or.us.

Though the new priorities database applies only to the Portland area, known within ODOT as Region 1, Horning said the system is being designed as a template for the rest of the state.

“It’s going to be the first time that we have a holistic picture of what our needs are and how they stack up,” Horning said. “It’s an exciting pilot project.”

The post ODOT is building its first complete wishlist of biking and walking projects appeared first on BikePortland.org.