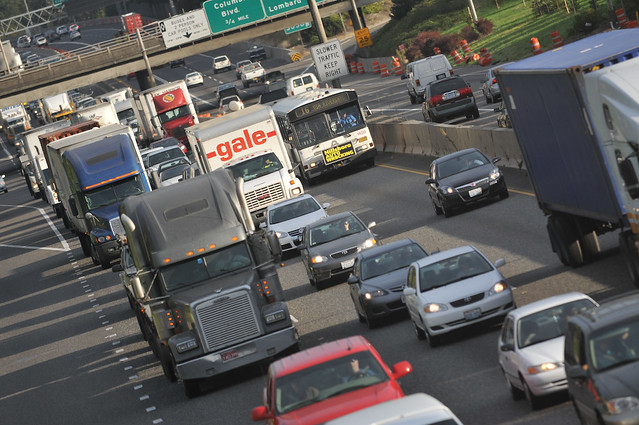 If you build it…
(Photo: J.Maus/BikePortland)

Thursday on the political blog BlueOregon, veteran Portland transportation wonk Ron Buel warned Oregonians eager for a gas tax hike to be careful what they wish for.

Though there’s almost universal consensus among Oregon Democrats that human-caused global warming is a catastrophic threat to the state, Buel writes that

It’s also an article of Democratic Party faith in Oregon that our highway infrastructure needs to be built out at breakneck speed in order to deal with growing congestion on the state’s highways, so that our economy can thrive. The annual Oregon Business Summit, held earlier this year, attended by thousands of businessmen, and capturing our leading politicians of both parties to speak there, recently proclaimed this congestion as the state’s number one issue. The Democratic Party in Oregon seems led by the nose by unions who also love that argument, including particularly the building trades and the AFL-CIO, who are dying for these local union highway construction jobs that used to be so numerous but have virtually disappeared as people drive less and drive vehicles that use less gas per mile.

Buel goes on to draw a line between roadway maintenance, which he supports, and roadway construction, which he doesn’t.

Based on the support of leading Democrats, and also based on their first-time-around legislative success on the Columbia River Crossing, a substantial increase in the gas tax to fund many highway construction projects is very likely to pass in this session. We’re not talking just funding existing infrastructure maintenance (like re-paving highways) at a higher level, which seems to everyone like a good idea as our highways fall apart. We’re talking about freeway and highway expansion that is otherwise stymied, idling not only the highway construction industry, but also the union construction workers, and the many engineers in the Oregon Department of Transportation ranks whose jobs also depend on designing new construction. …

President Barack Obama, in his recent State of the Union speech, picked an infrastructure support path that specifically didn’t include road and freeway expansion. He said

“21st century businesses need 21st century infrastructure – modern ports, stronger bridges, faster trains and the fastest Internet. Democrats and Republicans used to agree on this. So let’s set our sights higher than a single pipeline. Let’s pass a bipartisan infrastructure plan that could create more than 30 times as many jobs per year, and make this country stronger for years to come.”

Buel doesn’t offer any advice here on how or whether it’d be possible to raise the gas tax in such a way that it isn’t channeled into destructively large roadways. But this post is billed as the “first column in a four-part series on climate change and Oregon transportation policy,” so I’d expect further posts to tackle that.

Buel’s antipathy for trade and construction unions, which was honed during his long fight against the Columbia River Crossing, definitely makes many of his fellow left-leaners uncomfortable. But it’s worth noting that if you were really trying to maximize construction jobs, you’d actually build lots of biking infrastructure — it’s the most labor-intensive type of infrastructure there is, followed by walking infrastructure.

For Oregon Democrats, this legislative session is a rare opportunity for many reasons. The party has almost complete control of government, with big majorities in both houses, and it can easily put ballot issues to what’s likely to be a very liberal electorate in the November 2016 presidential election. Expect people with strong opinions, like Buel, to keep making noise about how the party should use this moment.