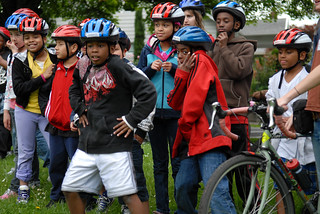 A Safe Routes to School event in Portland, 2010.
Other cities will get regional funding
for the programs thanks to new Metro grants.
(Photo: J.Maus/BikePortland)

With the federal government’s support for early biking education shrinking, the Portland area’s regional government is making a significant investment.

Safe Routes to School programs in Tigard, Beaverton and across the region are among the winners of $2.1 million in Metro grants announced Monday. Other highlights include a new active transportation staffer for Portland Community College, a bicycle tourism initiative in the Gresham area and continued support for the City of Portland’s marketing of biking, walking and public transit.

The $2.1 million in two-year grants were chosen from among $4.6 million requested by various nonprofits and government agencies around the region.

Monday’s official award announcement comes amid concerns about Metro’s decision, with this grant cycle, to eliminate funding for the city’s three transportation management associations. As we reported Saturday, this decision is likely to result in the closure of the Swan Island TMA, a two-person nonprofit that has played a major role in improving non-car transportation options to the inner North Portland industrial area.

This grant cycle’s cuts to the Swan Island, Lloyd District and Washington Park TMAs followed a trend from previous cycles to pull back on funding small transportation-focused groups in order to support organizations with multiple missions.

In 2013 and again this month, Metro denied grant requests from South Waterfront Community Relations to fund low-car transportation efforts in that neighborhood. In previous years, Metro had eliminated funding for similar programs in Clackamas County and Gresham.

One TMA did receive funding this year: the Westside Transportation Alliance, which the Washington County government shielded from any cuts. The City of Portland, which this year was again the largest single recipient of the program’s funds, did not make any such requests on behalf of any projects within its borders.

Washington TMA Executive Director Jenny Cadigan wrote on Friday that she was “shocked to be honest” by Metro’s decision not to renew funding for other TMAs. “It makes me even more grateful to have been awarded funds,” she added.

Despite the strong opinions related to the proposed elimination of TMA funding, there’s a lot to like in this project list, which is probably the biggest single source of active transportation program funding in the region. We’re certain to cover many of these projects as they have effects over the next two years.

For example, here’s Metro’s description of the PCC grant:

One of the new grantees is Portland Community College, which will use a $157,000 grant to hire a district-wide active transportation coordinator, install dozens of secure bicycle lockers at its Southeast and Cascade campuses and hold events and workshops to help students and staff learn how to safely walk and bike to class and work.

In previous cycles, the program generally hasn’t been used to pay for infrastructure. But that has changed this year, as Metro writes:

Also new to this cycle’s travel options grants are awards for light infrastructure, such as bike parking, on-road directional and use markings like sharrows and planning grants for local jurisdictions to kickstart implementation of local efforts to improve travel options for residents and commuters. Funded projects will provide easier navigation for pedestrians in Washington Park, fill a key bikeway gap in Gresham’s Rockwood neighborhood, build bike shelters in Aloha and support planning for expanded travel choices in Washington County.

The post Regional Safe Routes program is one of many winners from Metro grants appeared first on BikePortland.org.