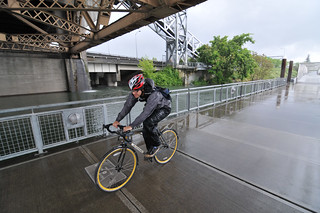 The incidents happened just north of this location.
(Photo by J. Maus/BikePortland)

A reader has shared a disturbing incident that took place while he was riding his bicycle on the Eastbank Esplanade before sunrise this morning.

According to Jeff B., at around 6:15 am he was thrown off his bike while riding southbound on the floating portion of the Esplanade just north of the Burnside Bridge. In an email to BikePortland, Jeff described what happened:

“A man hit me with what appeared to be a car antenna and checked me into the railing. At first I thought he was just messing with me and taking a step towards me to scare me, but that wasn’t the case. I was going about 20 mph and went down hard, even shattering my helmet.”

Thankfully, Jeff says he’s “OK” and only suffered a few abrasions and some soreness in his shoulders.

Unfortunately, he wasn’t the only one assaulted by this man.

As Jeff continued south to escape the suspect, he noticed a woman riding toward him. He attempted to warn her to stop, but wasn’t able to. “I was already a ways away and it’s dark on that portion of the path,” Jeff shared with us this morning, “so he did the same to her and she went down.” Luckily, she too was not seriously injured.

Jeff then called 911 and a Portland Police Officer responded a short time later. The officer told Jeff that yet another rider had recently called in a similar incident. A police report has been filed and we’ve requested comment from a PPB spokesperson to hear if any updates are available on the case.

“I know this was a random incident but it still has me really scared of my commute route now… I just want folks to be careful.”
— Jeff B.

The man who assaulted the riders walked away after the incidents and was not apprehended. Jeff added that the man appeared to be “mentally unstable and looked to be part of the transient crowd.”

Just north of the ramp, where Jeff says the man walked toward after the assaults, there’s a cut in the fence that leads to ODOT-owned property under I-5. We noted this hole in the fence in an unrelated story back in November.

Jeff has mixed feelings about what happened. He wants the man to get the help he needs, but it’s not the first time he’s had “uncomfortable moments” on the path during his morning commute.

“I know this was a random incident but it still has me really scared of my commute route now… I just want folks to be careful.”

Like other off-highway paths in the Portland Area, these important and busy transportation corridors are not regularly patrolled by uniformed PPB officers and path users are often by themselves — especially in early morning/late night hours. There are a few Portland Parks & Recreation rangers, but they deal with low-level livability issues and rely on the PPB to handle more serious crimes.

This is not the first time we’ve covered safety concerns on paths in the Portland area. Back in September of 2012 we shared the reports of several people who had been harassed while bicycling on the Springwater Corridor path.

“Central Precinct officers are aware of the incident but no suspect has been identified. Based on the report, it appears that the suspect is likely a homeless person.

There have been no similar reports but obviously we want people to keep their eyes out and to call 9-1-1 if necessary.”