A new advocacy group is angling for Oregon to use its moment as one of the only fully Democratic-controlled state governments in the country and pass the country’s first statewide carbon tax.

The group, called Oregon Climate, is pushing a concept called “tax and dividend”: instead of sending the proceeds into government coffers, all of the revenue collected from wholesale fossil-fuel transactions — gasoline to a distributor, coal to a power plant, and so on — would be pooled and divided evenly among Oregonians in the form of checks worth an estimated $500 to $1500 per year.

“Rather than bundles of piecemeal decision-making, you’d have an economywide transition to walkable, bikeable, livable cities.”
— Camila Thorndike, Oregon Climate

Prices would rise in Oregon for concrete, gasoline, electricity and other fossil-fuel-intensive products. Dan Golden, Oregon Climate’s volunteer policy director, said Tuesday that their proposed tax of $30 per ton of carbon (increasing by $10 each year) would translate into about 27 cents per gallon of gasoline, increasing another 9 cents each year.

However, those additional costs would be offset by the checks Oregonians would receive. Oregonians with smaller-than-average carbon footprints would come out ahead, while those with larger-than-average emissions would lose — giving everyone continued incentives to cut their energy consumption.

“I’m not a transportation expert but I think if I were, I’d be really stoked about carbon pricing,” Thorndike said. “Rather than bundles of piecemeal decision-making, you’d have an economywide transition to walkable, bikeable, livable cities. … We’d have so many incentives backed financially to really build our lives and our economy around alternatives to cheap gas.”

Carbon tax could lead to gas tax flexibility, too 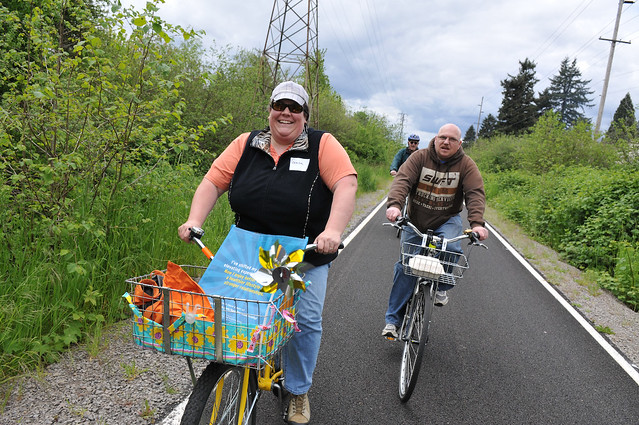 Unlike many states, Oregon can’t use gas taxes or car-tab fees to finance off-street paths like the Springwater Corridor. But a carbon tax would require changing this rule.
(Photo: J.Maus/BikePortland)

In addition to that benefit to people who get around Portland by bicycle, Oregon Climate’s proposal might also open another door in the transportation world. Because a tax on greenhouse gas emissions would count as a tax on gasoline, Oregon Climate’s proposal would only work if the state votes to amend or repeal its 35-year ban on using gas taxes or auto fees for anything except roads.

That ban, in Article IX, Section 3a of Oregon’s constitution, has been a thorn in transportation advocates’ side since the day it was passed. Among other things, it’s one of the big reasons the Portland area has so few off-street biking paths.

But the ban has many friends, too — so many that it’s long been seen as politically untouchable.

One of its enemies is longtime local transportation advocate Jim Howell, who in a separate effort is trying to get support for a bill, SJR 16, that would let vehicle taxes and fees be spent on “infrastructure that reduces traffic burden of, or pollution from, motor vehicles on public roads.”

Howell argues that 2016, a presidential election year, will give Oregon an electorate as friendly as it’s ever been to repealing that ban.

The year 2016 is also in the sights of Oregon Climate, though Golden conceded that the group is working toward a possible constitutional amendment “whether or not it’s politically realistic now.”

“We want to be the terrier that sinks their teeth into this thing and won’t let go,” he said. “We’re trying to let everyone know that we’re not going to go away if it doesn’t happen right now or it won’t happen in 2016. … There are a lot of voices out there motivated by the politically realistic thing. We’re motivated by the scientifically realistic thing. And that is that we need an effective price on carbon.” 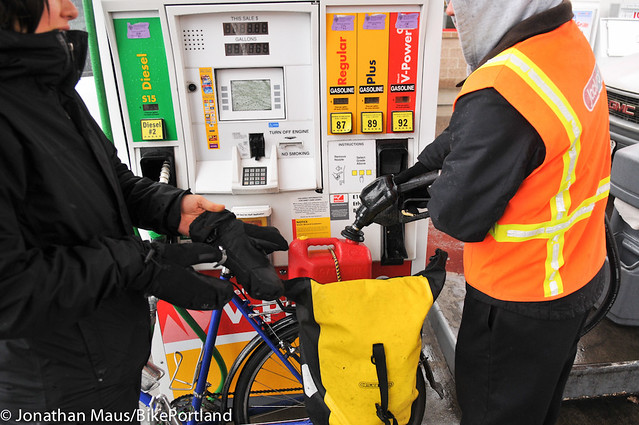 A cap-and-dividend system would raise energy prices but wouldn’t count as a tax.

Putting a price on carbon might not require a tax. Another option would be for the state legislature to approve a “cap and dividend” system that would let the state sell or auction off the rights to emit certain amounts of greenhouse gas.

The proceeds from those sales would be evenly divided among Oregon residents each year, much like those from a tax.

“A tax is better,” Golden said. “It has a smaller regulatory burden; you’re not creating a whole market for selling permits. … I know what the price of carbon is going to be in 10 years or 30 years.”

The cap-and-dividend option would leave the constitution’s restriction on gas taxes untouched.

Golden said Oregon Climate is focused only on one goal: pricing carbon and redistributing the proceeds evenly among Oregonians.

“There’s no better time than right now,” he said. “Except for years ago.”