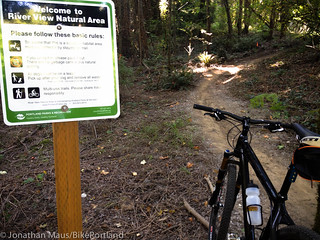 And that future, we’re sorry to report, does not include mountain biking.

The City of Portland does not think that mountain bike riding is compatible with their conservation goals and says all biking at River View must cease on March 16th. This is a stunning blow to off-road bicycling advocates who had set their sights on River View as a key trail-riding area that would also feature a family-friendly skills course.

The memo references several environmental concerns that led to the decision, including endangered fish species that rely on the 146-acre parcel’s seven streams that flow into the Willamette River.

Here are the key parts of the memo:

Deferring advocates to the Off-Road Cycling Plan isn’t likely to assuage their frustration — especially since many of them see the plan itself as nothing more than a stall tactic that is unlikely to result in new singletrack riding opportunities.

The Portland Parks & Recreation bureau (which Fritz heads up) and the Bureau of Environmental Services (run by Fish), teamed up to buy the 146 acre wooded parcel in May 2011. Since the day the sale went through, off-road biking advocates have assumed the area would be developed to include bike trails. People have been riding the dirt trails at River View for several decades, and it seemed that, especially after being snubbed at Forest Park, mountain biking would be a natural fit at this location.

Even city staff were publicly open to the idea. In August 2012, Emily York, a policy coordinator for Commissioner Fish, said biking and conservation efforts could co-exist. “Our team is open to those two things happening at the same time,” she said, “they’re aren’t mutually exclusive.”

Portland’s legions of off-road biking lovers have been pushing the city for years to provide more access to close-in trails that don’t require local residents to drive up to an hour away just to ride.

To help make the case that mountain bike access should remain once River View got developed, volunteers have donated many hours of their time at several work parties to clean up the area and restore and maintain existing trails.

Just last year, the Northwest Trail Alliance came out with a plan to build six new bike trails and a family-friendly skills area.

We’ll have more on this story later this week. Download the memo here (PDF).