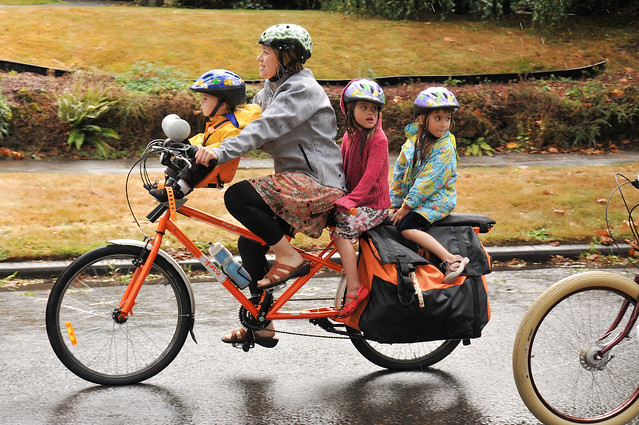 Why look back?
(Photo: J.Maus/BikePortland)

The Great Recession has left plenty of marks on the Portland area. Here’s one of the happier ones: so far, at least, a lot of the cars aren’t coming back.

The number of registered passenger vehicles in Multnomah County peaked in 2007, a review of 16 years of state records shows. After the economy began shrinking in early 2008, passenger vehicles per resident started a rapid slide, landing 9 percent lower by 2012. Finally, in 2013 and 2014, the local economy began a relatively rapid rebound out of one of the sharpest local downturns in the country.

But in those two years, the number of vehicles the average Multnomah County resident registers has edged back up just 1 percent.

The story is similar in Washington County, where car registrations per capita fell 5 percent from 2007-2012 with a 1 percent rebound over the two years that followed. Data: Oregon Department of Transportation and Portland State University. Chart: BikePortland. For readability, axes do not start at zero.

The latest vehicle registration totals for 2014 were circulated by Washington County last month.

Interestingly, Multnomah County’s persistently low ratio of cars to residents (for the area, that is) barely seems to have been affected by its influx of jobs and higher-paid residents. As of 2013, the median income of a Portland resident has raced past Washington County’s: Because the population of all three counties keeps growing — Washington and Multnomah counties by an average of about 7,500 people each year, Clackamas by about 3,500 on average — the number of cars in each county has grown in the last few years, too. But even with all that growth, Multnomah County still has fewer registered cars than it did in 2007.

I asked Todd Litman, the transportation researcher who operates the Victoria Transport Policy Institute, why this might be happening.

“Many of the factors are structural,” he said. “The aging population is the biggest one. When Baby Boomers retire, they reduce their vehicle travel by half, and then each year they reduce their travel a little bit more.”

Litman thinks that trend has combined with the cumulative effect of better walking, biking and transit information to increase the number of households that share a single car for multiple adults.

“Somebody who 10 years ago would have driven to work is now not only seeing better bicycle facilities and hearing about the importance of healthy lifestyles and getting lectures from their physician about the benefits, but they’re also seeing their neighbors make that shift and it’s a little more socially acceptable,” he said. “And higher fuel prices or parking fees or whatever.”

“When the car breaks down,” he concluded, “they’re not going to replace it.”

The post Multnomah County car registration is down 8% since 2007, and isn’t rebounding appeared first on BikePortland.org.