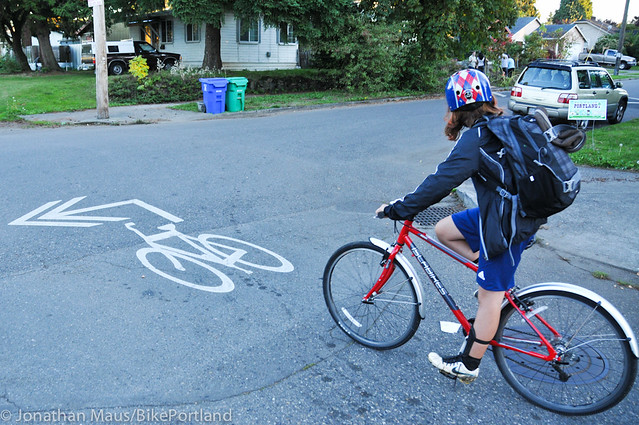 In the parts of Portland where neighborhood greenways exist, they’re the most pleasant way to get around. Installing them is cheap, fast and politically popular because (other than the occasional traffic diverter) they basically bother nobody.

After its biking advocates spent much of the 2000s trying and failing to build meaningful networks of protected bike lanes on commercial streets, Portland rolled out 40 miles of comfortable connected neighborhood greenways and (as we shared in Monday’s roundup) rightly earned them a spot among Streetfilms’ 10 global best practices for street design.

But, as reader CarsAreFunToo showed in a comment on Thursday’s post about speed enforcement on high-crash corridors, they also seem to come with a big indirect political cost.

Here’s what CarsAreFunToo wrote, starting with an excerpt from our article (in italics). I’ve boldfaced the start of the section about neighborhood greenways.

“They all pointed out that the biggest liability they can see in the program is that when drivers become accustomed to the location of these photo radar illustrations, they will speed anywhere the camera is not,” Kransky said.

Which was, Kransky realized, actually just a way of saying that the cameras are extremely effective.

WTF, mate? So, you reduce speeding in one place but gain it in others (the more residential surrounding streets) and call that a win? That don’t make a lick of sense. That’s just shifting the use conflict.

And let’s hear a little more insightful analysis of the causes of these accidents. If cars are just plowing into bikes in the bike lanes and people on the sidewalk because they can’t handle the speed by all means put in GATSOs. If it’s poor lines of sight or just bad design by all means do a redesign.

But the idea that bikes should be on every street no matter how high traffic it is (I’m thinking of major car thoroughfares here, where they want these cameras) is bogus. Why not direct bike traffic away from these areas and allow cars to travel at the speeds the roads are capable of handling? That seems like a commonsense way to limit use conflicts. And one which many people do naturally without much thought, just like people walk on the sidewalks instead of in the middle of the street. ‘There are a lot of cars on Sandy and they go kinda fast ’cause it’s a major road and riding next to fast moving cars sucks ass. Oh sweet, one street over goes the same way and it’s nice and quiet. I’ll ride there.’ More effective for cars, more effective and safer for bikes.

Oh snap, we already do that! But for some reason that’s not good enough. Now y’all just have to have one of Broadway’s lanes where it’s busiest because Tillamook doesn’t have any trendy, cute shops. It’s never enough. Tillamook is a great street to commute on. Barely any cars, nice houses, and more interesting and shaded than Going which I use now that I live further north.

The me-me-me attitude of so much of the bike community here is utterly maddening and makes me not want to be associated with it in anyway. “We don’t like cars so let’s ruin car travel for everyone else.”

Bikes are fun and useful, but guess what, cars are fun too and way, WAY more useful which is why they’re the dominant form of transportation. Cars aren’t going away folks. A more inclusive advocacy approach would do you a lot of good.

Obviously there are lots of things here that many readers will find errors and disagreements with, including the fact that the post and the bill it discusses were about speed limits, not the presence or absence of bikes or bike lanes.

But CarsAreFunToo (who I hope you’ll agree deserves to be treated respectfully) makes some points that Portlanders have gotten used to hearing over and over and over again.

If neighborhood greenways had been proven to be associated with increases in bicycling, this might not be a problem. But in the cities where they’ve been built the most — Vancouver BC, and Portland — they haven’t, at least not yet. Are neighborhood greenways less intuitive than bike lanes? Less visible? Less direct? Something else? It’s not clear. I’m among many bikeway wonks around the country eagerly awaiting the city’s release, at the Oregon Active Transportation Summit later this month, of its in-depth analysis of neighborhood greenway data by some of the country’s smartest and most thoughtful experts.

Meanwhile, I’m watching nervously as cities that are successfully building comfortable bike lanes on commercial streets — Seattle, Chicago, Indianapolis — work to follow the neighborhood greenway innovations of Vancouver and Portland. Neighborhood greenways work for me, and I want very much for them to keep expanding. But (unlike CarsAreFunToo, to whom I’m grateful for engaging with these ideas) I don’t personally think they’re enough to work for everyone.

If neighborhood greenways inadvertently stop us from being able to make biking work for more people, that’d be very sad news.

Yes, we pay for good comments. We’ll be mailing a $5 bill to CarsAreFunToo in thanks for this great one. Watch your email!

The post Comment of the Week: The hidden political cost of neighborhood greenways appeared first on BikePortland.org.