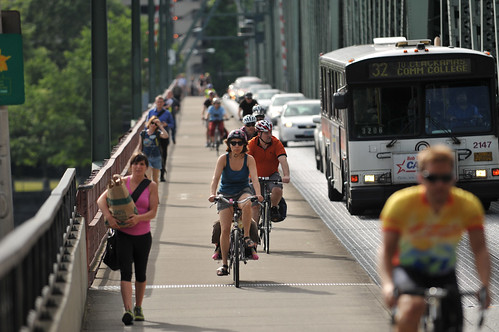 You might call this winter the September that never ended.
(Photo: J.Maus/BikePortland)

For all the freakishness of the warmest February in Portland history — forget the wildfires and snowpack, think of where housing prices are headed if we turn gradually into San Diego — we’ve all enjoyed the benefits.

That’s the number of additional bike trips taken over the Hawthorne Bridge (in both directions) as captured last month by Cycle Oregon’s bike counter, compared to February 2014. February 2014 wasn’t a normal one, either. Its multi-day snow and ice storms led to some of the lowest one-day bike counts ever. Compared to February 2013, bike traffic last month was up just over 10 percent.

The post What a difference the sun makes: Hawthorne bike traffic up 46% over last February appeared first on BikePortland.org.