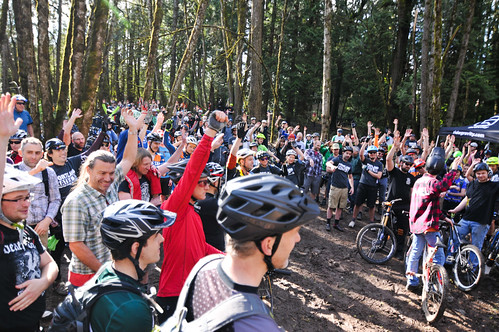 “Raise your hand if you think we’re compatible with the resource goals at River View!”
(Photos by J. Maus/BikePortland)

69-year old Hillsboro resident Roger Lynn just found out about the bike trails at River View Natural Area a few weeks ago. “I’ve been looking for a place like this, so I’ve been here three times in the past week. It’s just such a shame that the trails are closed now.” 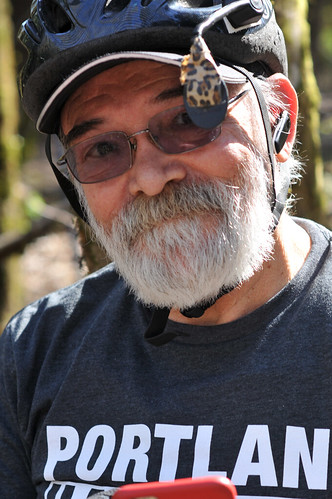 Roger Lynn rode out from Hillsboro.

The over 300 people who showed up at River View on the first day of the new ban agree with Lynn. They wore shirts emblazed with “Portland Hates Me,” “Mountain biking is not a crime,” and “Free Forest Park.” One man held up a sign that read: “Bureau of Evasive Sycophants” (a play on BES, Bureau of Environmental Services) on one side and “Fish is rotten” on the other (a reference to BES Commissioner Nick Fish). There were men and women and people of all ages. They gathered among River View’s tall trees and under sunny skies just off SW Palatine Hill Road to protest the recent decision by Commissioners Amanda Fritz and Nick Fish to ban biking in the 146 acre parcel. 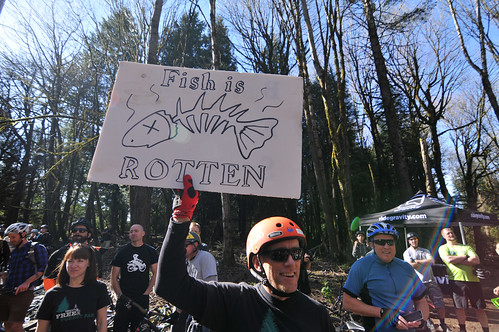 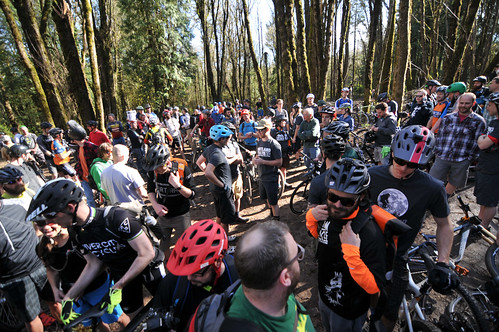 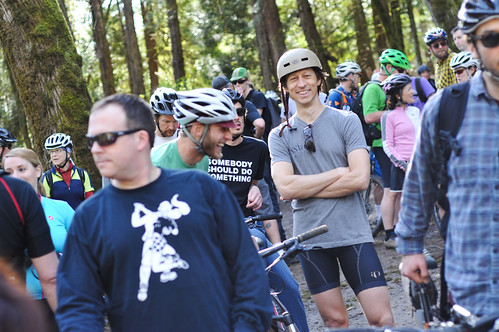 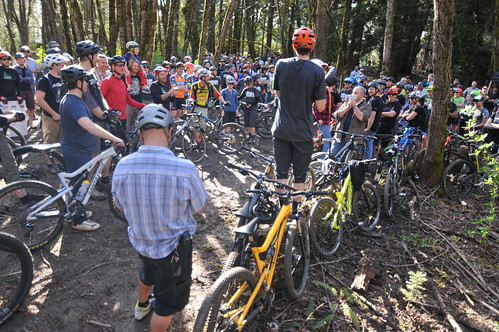 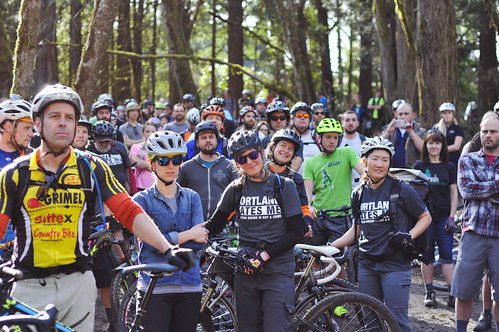 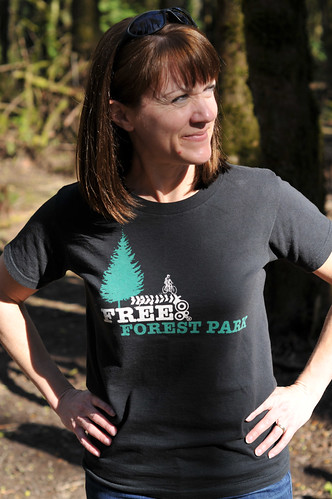 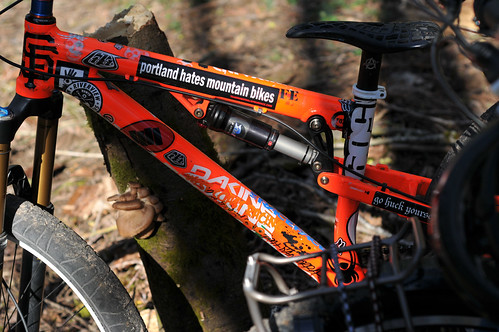 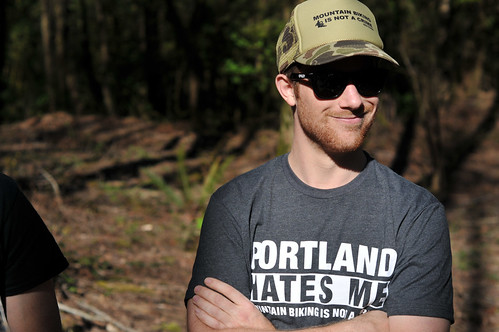 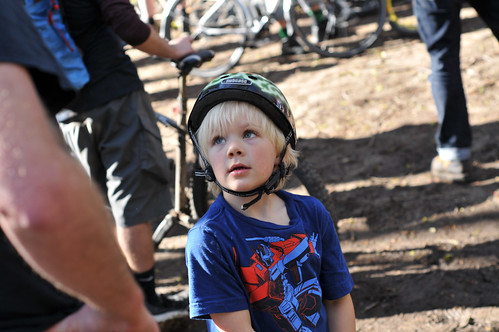 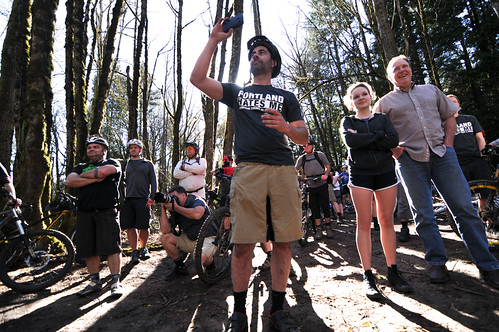 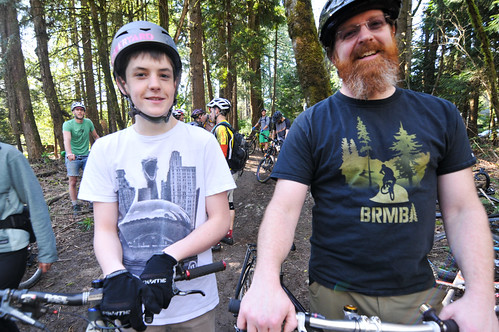 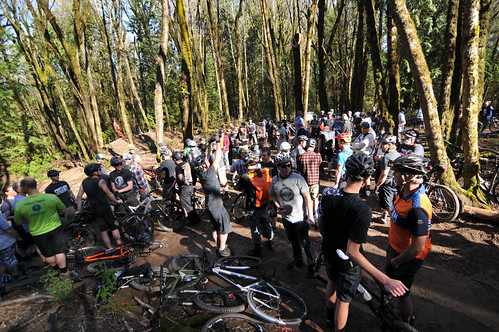 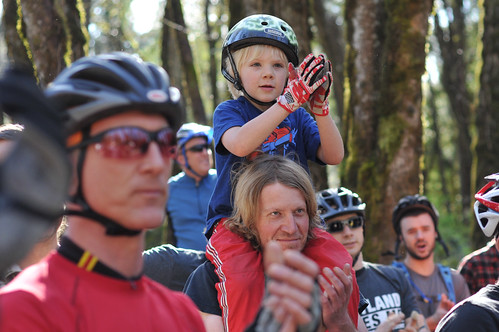 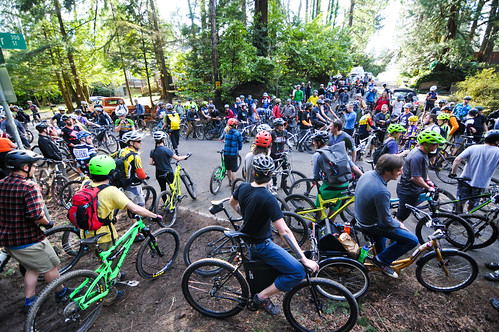 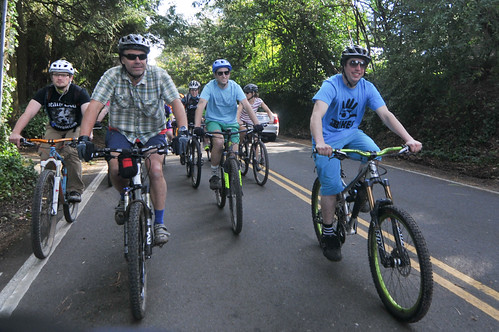 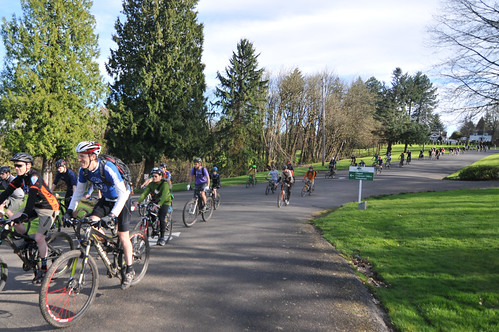 Chris Daniel came from Vancouver because he’s afraid of this type of policy-making might creep up to his local urban trail riding area in Camas. “This is about sticking up for a political process. If we let this happen here, more politicians might think, ‘They did this in Portland and no one seemed to mind.’”

As the crowd filled in at today’s ride, organizers passed around a petition that read: “I support ending the River View bike ban.”

This issue has galvanized the community in an unprecedented way. Ride organizer Charlie Sponsel, a member of the River View Natural Area Technical Advisory Committee who thinks the way this decision was made is “totally unacceptable,” told a TV news crew at today’s event that he feels it’s “the best thing that could have happened.” Why? “Because it shows the commissioners’ true opinion about mountain biking.”

In Sponsel’s view, the River View bike ban comes down to one thing: “Antipathy from City Hall toward mountain biking.” 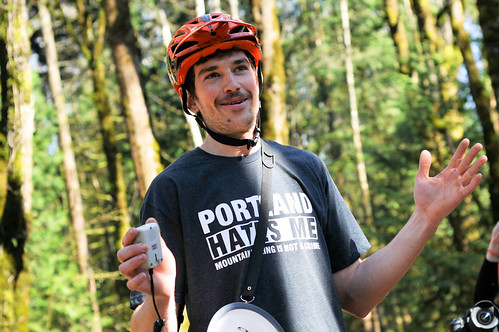 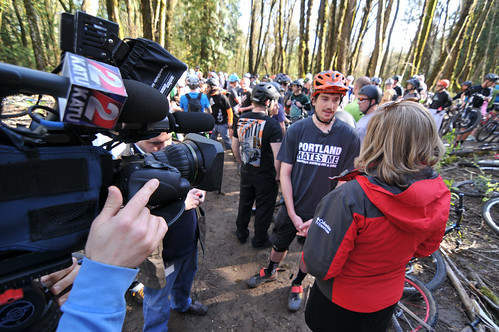 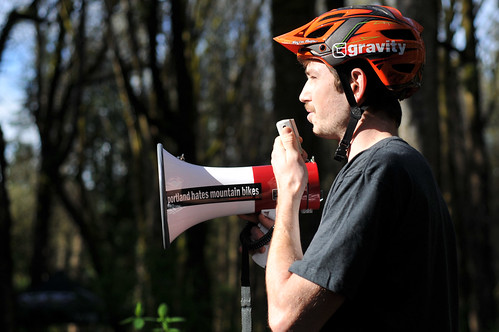 Frank Selker, the citizen activist who tried to improve bike trail access at Forest Park seven years ago, knows that antipathy all too well. Selker was at today’s protest.

“It’s discouraging,” Selker said as he looked over the large crowd, “People are really upset by this because they’ve been riding here forever just fine while it was under private ownership. The irony is, the public finally took it over (it was purchased by City of Portland in 2011) and now the public is being excluded.”

Another veteran of Portland’s struggle to embrace mountain biking was at the event. Chris DiStefano, who gave an impassioned speech about the need for more local singletrack to a meeting of the City of Portland’s Bicycle Advisory Committee way back in May of 2007, showed up to support the protest. When I asked him about that speech today, he said, “Eight years later and we’ve still got nothing to show for it.”

Before the ride began, Sponsel grabbed a megaphone and stepped up on a log to address the crowd.

Sponsel shared a personal story and pointed out the potential of a riding area like this for kids.

“I started mountain biking when I was seven years old and it was one of the most positive forces in my life. It has made me the person I am now. The city of Portland doesn’t want to give kids a place to ride, and I can’t figure out what that’s all about. With all of the couches and video games available to kids these days, why does the City of Portland not want kids recreating and getting into nature on bikes? It’s mind boggling.”

Feeling like he and other advocates were “kicked out” and “abandoned” by Commissioners Fritz and Fish, Sponsel now says he plans to fight until he’s let back in. “We want to be back at the table and we want to be stewards of River View… We’re not going to let Amanda Fritz and Nick Fish forget about the mountain bikers of Portland,” he said, “we’re going to keep the pressure on.”

— In related news, I was a guest on OPB’s Think Out Loud radio program that covered the River View issue today. The audio from the segment is below…

UPDATE: Check out this excellent short video from the protest ride, accompanied with audio of Charlie Sponsel speaking at the event: