What makes a great bike shop? That’s a question bike nerds like myself could debate and discuss forever. Or, we could save our breath and just roll over to River City Bicycles on SE Martin Luther King Jr. Blvd and see a living, breathing example of one.

Since 1995 River City has set the standard for bike shops — not just for Portland, but the entire country. Owner Dave Guettler and his solid core of long-time employees have been keeping it real for 20 years.

For the past few weeks the shop has been running local ads saying “thank you” to the community and telling us they wouldn’t be here without such loyal customers. That’s technically true. And it’s a nice thing to say. But I’ve been thinking, would we all be here without River City? Shouldn’t we be thanking them?

This shop is an institution in Portland. It’s won all the awards and accolades from the bike industry (including “Retailer of the Year” in 2010 and “Most Female Friendly” in 2008) and they have sold over 75,000 bicycles. But as with any great shop, there’s much more to it than that.

Here’s a tiny sampling of the type of things River City does that sets them apart from other shops:

– The shop funded the publication of Rubber to the Road, a guidebook to local rides that introduced me to some excellent routes.

– River City has been an unwavering title sponsor of the Cross Crusade, which happens to be the largest (in terms of participation) cyclocross racing series in the world.

– Remember back in 2008 when they gave a free bike to the person who could guess when gas would hit $4 a gallon?

– River City has always had a flair for creative and subversive marketing. Their print ads are legendary and they’ve even done TV spots.

– How to make a bike shop appealing and welcoming to women used to (and still does to some degree) baffle the industry. Things have come a long way in recent years, and River City was one of the first to truly get it. In 2008 they were named the most female friendly shop in the entire country.

– River City was one of BikePortland’s original advertisers and still supports our work today (thank you Dave!).

– River City has always fostered and promoted local framebuilders. Joseph Ahearne, one of our most veteran and respected local builders, is a former employee. Before he made it on his own, Dave would give Joseph space on the sales floor to display his bikes. More recently, we covered an event where the shop held a party to highlight Cielo and Argonaut, two local bike brands.

And of course at the heart of any great bike shop is the owner. And in the case of River City’s Dave Guettler, we simply could not be luckier as a city that he has made this shop his life’s work.

Dave is a humble and honest guy who’s just as comfortable in his hard-rocker wig playing guitar with his band as he his racing cyclocross (on Belgium racing legend Sven Nys’ Colnago), building new hardwood fixtures for the shop, or schmoozing it up at the BTA’s Alice Awards. 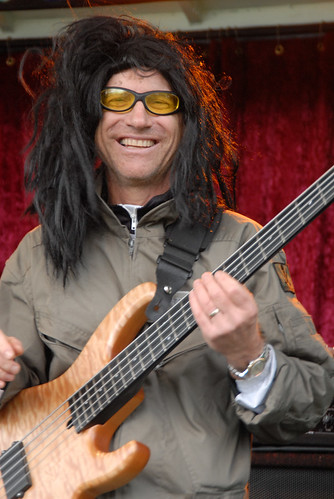 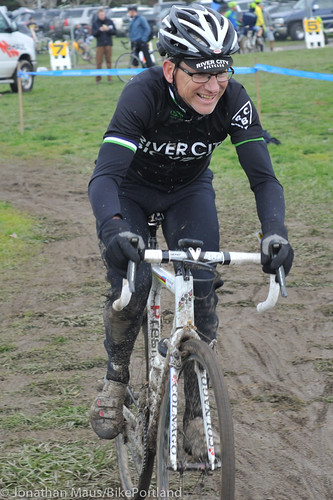 Like many people who weren’t born in Portland but came here to see if their bike dreams would come true, Dave had an idea (a large independent store instead of a multi-store chain), took a gamble that this city would embrace it, then went all-in. Not knowing what the future held, he dumped his entire life savings into one brick-and-mortar bike shop.

And it worked. I think I speak for a lot people when I say it’s hard to conjure an image of Portland’s bike scene without River City in it.

Thank you Dave, and thanks to the whole crew for an awesome 20 years.