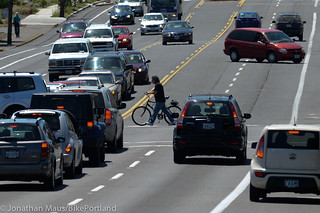 This week is Bike Week in east Portland’s Rosewood neighborhood and it’s also the launch of the much-needed cycling spark that east Portlanders have been waiting for.

As we learned first-hand back in June, once you cross over I-205 on a bike everything changes. There are no longer bike shops on every other corner, the streets feel a lot less welcoming, and you suddenly feel like a fish with no school to swim with.

“Coming to Portland and seeing the rich amount of bike resources in the central city, and taking advantage of those resources myself on a daily basis, I was struck by the fact that those resources were fairly lacking in east Portland.”
— Matt Martin, director of Rosewood Bikes

Rosewood Bikes, a new community bike shop and advocacy organization that will open its doors for the first time tomorrow, hopes to change that. The new shop is part of a growing movement in east Portland to create the kind of cultural infrastructure that’s essential to making a place bike-friendly.

46-year-old Matt Martin is the director of Rosewood Bikes. He moved to Portland four years ago from Omaha, Nebraska where he ran the Community Bike Project. In a phone interview this morning, Martin, who has a background interest in equity and social justice issues, said opening up a similar bike shop in east Portland was a “no-brainer.”

“Coming to Portland and seeing the rich amount of bike resources in the central city, and taking advantage of those resources myself on a daily basis,” Martin said, “I was struck by the fact that those resources were fairly lacking in east Portland.” Martin did a lot of research before charting his course. He did consulting work for the Community Cycling Center, some contract projects with the Portland Bureau of Transportation, and is now working part-time at Citybikes Co-op. He also learned about the work currently being done in east Portland by the Bicycle Transportation Alliance (co-organizers of Rosewood’s Bike Week), PBOT, Bike Farm, the CCC, and others. “It’s not that they don’t want to do more in east Portland,” he explained, “there’s just so much work to do and everyone has limited capacity.” What Martin hopes to provide this neighborhood that’s further away from downtown Portland than Vancouver Washington, is a sense of permanence. “There have been good, one-off efforts to do bike stuff in east Portland, but nothing had ever been of a solid, ongoing, and continuing nature out there. It just seemed to me like a fertile area for activity.”

He was drawn specifically to Rosewood because the work they’ve already done around bikes. The Rosewood Initiative won a $1,000 grant last winter to install a bike oasis at their location on SE Stark at 160th. The oasis gives locals access to basic tools, parts, and volunteers to keep their bikes running smoothly. The Rosewood Initiative has also partnered with with the Community Cycling Center and hosted several well-attended bike safety events put on by the Portland Police Bureau.

On Wednesday (3/25), Martin will open up a pop-up shop inside The Rosewood Initiative Community Center. With donated tools, workstands, and bicycles he’ll offer a free bike repair workshop from 4:00 to 6:00 pm. The event will kickoff weekly open shop fix-it nights and will provide Rosewood Bikes with a place to flap their wings.

Martin hopes to find a permanent location for his shop by mid-to-late summer where he can expand his organization and take it to the next level. Ultimately, he hopes to make Rosewood Bikes a “center of bike activities” including classes, advocacy opportunities, employment training, youth mentorship programs and more.

Look for the Rosewood Bikes table at Sunday Parkways East Portland this May and stay tuned for their fundraising campaign to launch in the coming months.

Bike Week is organized by the Bicycle Transportation Alliance and the Rosewood Initiative. Check out the flyer below (PDF here): The post ‘Bike Week’ is start of something big in outer east Portland appeared first on BikePortland.org.