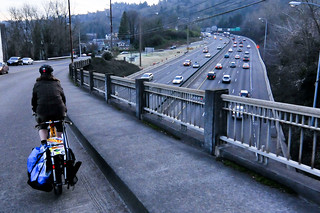 It might get faster down there.
(Photo J. Maus/BikePortland)

Despite a clear connection between speed and fatal and serious injury crashes, ten Oregon lawmakers are sponsoring a bill that would raise our state’s freeway speed limit to 75 miles per hour.

Currently, Oregon is one of just 13 states that have a 65 mph speed limit on interstate highways. 12 states have a 75 mph limit, three have set 80 as their top speed, and Texans are allowed to go 85.

I reached out to this bill’s sponsors (all 10 of which are Republican) to ask them their reason for supporting it and to ask whether or not they were concerned about its safety impacts. So far, only one of them has replied.

Rep. Mike Nearman from Dallas, Oregon responded via email. “The highways were designed for higher speeds,” he wrote in response to my first question, “And other large western states have higher speed limits.” As for safety, he wrote, “I am concerned about the safety impact of higher speeds. Any speed limit is a trade off between safety and efficiency.”

That efficiency argument was also used in 2011 when another Republican-led effort to raise highway speed limits was put forward in the Oregon Legislature. Back then, Hillsboro Senator Bruce Starr said, “By modernizing our speed limit we can increase the flow of traffic, lower commute times and fast track commerce through the state.”

Starr’s bill didn’t survive, but that doesn’t seem to have killed the idea.

Freeways have been getting faster for decades now. According to the Insurance Institute of Highway Safety, Congress mandated a 55 mph maximum speed in the 1970s, but the law was repealed in 1995.

The Bicycle Transportation Alliance hasn’t issued any formal comments on this bill, but Advocacy Director Gerik Kranksy said via Twitter that if the bill passed, it could increase the probability of fatalities on ODOT roads by 12 percent.

From where we sit, it’s interesting to see a state flirt with a commitment to Vision Zero and other life-saving measures, while we also consider increasing one key factor that leads to so many deaths.

We’ll find out how this new attempt goes later this week. HB 3094 is set for a public hearing in front of the House Committee on Transportation and Economic Development on April 3rd.