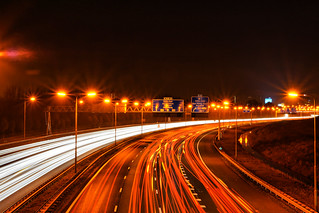 The most important concept in American streets advocacy right now seems to suggest that all rapid car travel should be abolished.

That’s the perspective of BikePortland reader Tait, who argued semi-satirically this week that if preventing one person’s death is truly more important than fulfilling everyone else’s desires, maybe we should cut freeway speeds to 35 mph, or even lower.

In a comment beneath our post Tuesday about some Oregon legislators’ effort to raise cars’ freeway speed limit from 65 to 75 mph, Tait had this to say:

Commuters aren’t the only road users. For a 600mi drive down to California or 400mi drive to Ontario, an extra 10mph cuts an hour or more off the driving time, which is significant. (And would be also, to commercial freight and shipping, if it applied to them.)

There is a tradeoff, so just saying “always choose the lower speed” isn’t a feasible answer. Why not make the interstate limit 45? 35? At 35 mph, most car accidents at least are nonlethal, and survivability for non-car crashes is significantly better than even 45, much less anything higher. At 25, we’d even have survivability for a significant fraction of car-to-non-car accidents. I mean, when lives are at stake, what right has anyone to complain about their Tualatin to downtown Portland commute taking 1.5hrs? I’m exaggerating for effect, but as a serious question, what rate of fatality is acceptable?

I think the focus on fatality is actually slightly misplaced. It’s a secondary factor, but the primary concern should be accident rate, not accident lethality. And the effect on accident rates of a 65 to 75mph limit change is fairly small. If we could get the accident rate down, then the increased lethality might be more than offset, resulting in overall fewer lives lost.

Tait isn’t questioning the urgency of reducing traffic fatalities. But this week’s still-rolling discussion of freeway speed limits tests the outer edges of the policy campaign that Oregon Walks and the Bicycle Transportation Alliance launched on Monday.

Vision Zero’s believers, like New York City’s Paul Steely White, say Vision Zero works as a political campaign because it’s easy to understand. But I’ve never yet had a conversation with someone outside the streets advocacy world who finds the concept easy to accept. Is that because they haven’t awakened to its merits? Or is it because, deep down, they don’t actually share the values it’s built on?

Yes, we pay for good comments. We’ll be mailing a $5 bill to Tait in thanks for this great one. Watch your email!