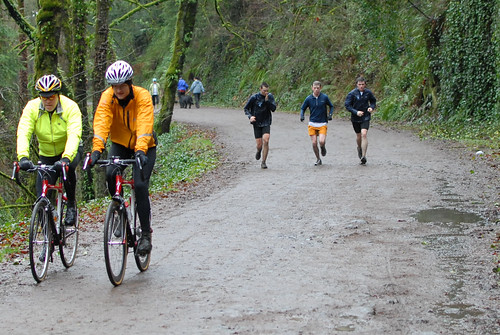 It’s no secret that gravel road riding is a huge thing in the bike world right now. The mainstream momentum for riding “road” bikes on logging and other unpaved roads has been building for several years and it’s now a bonafide bike industry market segment.

Check out the email we received last night: This is a pretty interesting development. It never occurred to me that people would want to run on backroads like the ones I explored a few weekends ago. I’m used to seeing runners in Forest Park (like in the photo above); but I’ve never seen them in more remote locations.

The real question is, like @haraldkliems mentioned on Twitter just now, will the running industry respond like the bike industry has by introducing new lines of “gravel running shoes.”

Are you a runner? I’d love to hear what you all think.

The post Hey gravel road riders – runners want in on the action too appeared first on BikePortland.org.