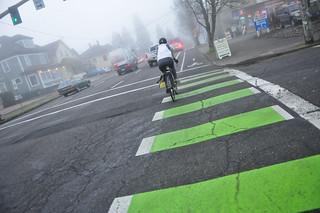 We get a lot of interesting emails here at BikePortland (and phone calls for that matter). And because we’re easy to find in search engines and we’ve been around for a decade or so, a lot of those emails come from people who aren’t daily readers or loyal fans. We often hear from people don’t even ride bikes and who just have something about cycling they want to get off their chest.

The question I want to share with you today comes via an email from David J., someone who identified himself as a driver. The subject of his email was “Autos and bikes”:

So…I want to be a good and kind driver wrt [with regard to] bike riders. The rub is that I have no idea what the green street markings mean. I get bike boxes. But what do the solid and the stripped green lanes mean? Can I drive in or over them as I proceed, keeping bikes in mind? Are there laws? Are things just being made up? Are there resources so that I can learn what is expected? Why don’t I, as a generally informed citizen, know?

David’s email caught my eye for several reasons. First, I love that he wants to be a more informed and capable driver around Porltand’s many bike riders. (Thanks David! We need more people like you!). And second, it reinforced my opinion that we can’t rely solely on paint if we want to create a safe, predictable, and easy-to-use transportation system.

I have a strong hunch that if we had more protected bicycle infrastructure — with physical separation from drivers and walkers, separate signals, and so on — people like David would have a much easier time driving around people riding bikes.

As for the answers to David’s questions; the solid and striped green that’s popping up in bike lanes all over Portland these days are simply a way of highlighting caution areas. They don’t change the legal standing of a bike lane — which means, no, you can’t drive in or over them. There are a few exceptions to this, such as when you are accessing a parking spot, turning, and so on. But as a general rule, bicycle lanes are for bicycling only.

And yes, to some degree the City of Portland, State of Oregon, Multnomah County, and other agencies that are using green color in bikeways are just “making it up.” The amount of green to use and the design of where the stripes go does follow some nationally observed best practices, but each application is largely left up to whatever planners and traffic engineers are working on the project.

David’s question about why he doesn’t know brings up another important issue. In Oregon (and in America in general) we don’t get nearly enough education and training with our driver’s license. If we were required to make more frequent visits to the DMV and pass harder driving tests, we’d all be better off.

What advice do you have for David?

— Read more from our Ask BikePortland series If you’d like to ask us a question, please use our contact form.

The post Ask BikePortland: As a driver, what does all that green mean? appeared first on BikePortland.org.