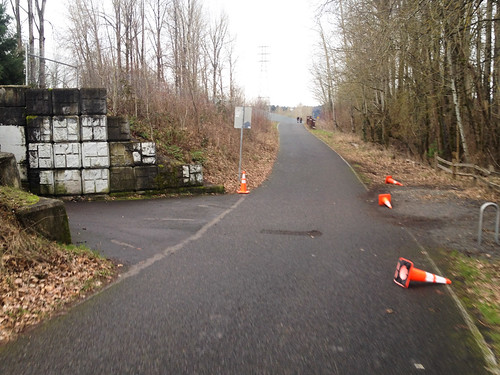 There will be a new stop sign for riders coming out of the Oaks Bottom path, which is on the left side in this photo. Parks will also add additional measures including paint striping on the Springwater that warns riders to slow down.
(Photos J. Maus/BikePortland)

Next week the City of Portland Parks & Recreation bureau will start a project that aims to solve serious safety issues at an intersection on the Springwater Corridor path. As we reported back in January, the parks bureau has said they’ve been “aware of some challenges” at the intersection and were considering changes.

Now they’ve moved forward and the changes are likely to be completed by the start of May. 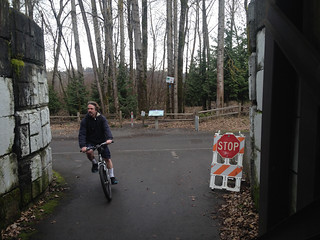 View from Oaks Bottom path as
it emerges onto Springwater.

Where the Springwater path makes a “T” with the Oaks Bottom path (that connects to SE McLoughlin Blvd Milwaukie Ave.), PP&R will add a permanent stop sign, a series of pavement markings, and plastic “delineator” posts to sharpen the turning radius and encourage slower riding.

The changes come after a collision last spring when a woman riding west on the Oaks Bottom path rolled out onto the Springwater path, causing another rider to stop suddenly and fly over her handelbars. The woman who was riding on the Springwater suffered major injuries and had to be taken to the hospital by an ambulance.

This intersection is tricky because of bad sight lines on the Oaks Bottom path due to a tunnel just before it pops out onto the Springwater. Add in the downhill on the Springwater that leads to high bicycling speeds and you’ve got a recipe for disaster.

Here’s more about the project from a PP&R statement:

Portland Parks & Recreation is committed to taking special care in the planning and design of such paths to encourage a satisfactory experience and safe sharing of the facilities for the full spectrum of trail users, regardless of differing ages, speeds, interests, and abilities. The intersection of the Springwater Corridor and the Oaks Bottom Wildlife Refuge Trail poses potential challenges for the various users that converge on the intersection.

PP&R crews will be installing a number of signage and striping improvements to enhance user safety. The improvements include new painted traffic control striping, highly visible flexible safety delineators and signage including a stop sign from the Oaks Bottom spur trail (where people access the Springwater from city streets) onto the more highly-traveled Springwater Trail. The improvements intend to provide clear right-of-way assignment to trail users, to provide guidance for trail users to ensure full awareness of the intersection, and to minimize conflicts and clarify the intersection to separate conflicting movements.

PP&R could not supply us with a detailed design drawing, but they did share stock photos of the type of signs, bollards, and pavement markings they plan to use… The diagonal-grid crosswalk stripes will be painted on the Springwater to encourage downhill riders to use caution. The new stop sign and painted stop bar (on the pavement) will be placed on the Oaks Bottom path right where it enters the Springwater. The plastic delineator wands will force riders to make a slower, right-angle turn into — and out of — Oaks Bottom.

We’ll update this post tomorrow with the budget estimate for this project; but it will likely be less than the $10,000 roundabout solution we shared back in January.

The project is set to begin next Monday (April 27th) and last about a week.

UPDATE, 12:38pm: The cost of this project is approximately $3,200 and it was funded through the General Fund.