Bike elitism can show up in lots of ways. One way is car-shaming.

Do you own a car? If you don’t own a car, do you use car sharing more than once a month? Do you accept rides from people? Do you use a car to travel around the state? Do you use a vehicle when you move to a new home?

If the answer to more than two of these questions is yes, then according to some people, you don’t qualify for the exclusive car-free bike-only club.

Of course, this isn’t a formal club. But that doesn’t mean people aren’t routinely excluded from it.

Some people will tell you that using cars is immoral and that people who use cars are failing in their duty to a healthier planet. This judgement renders 99 percent of the people in Portland as immoral and failing. Even if those people are living in East Portland, where the bike infrastructure is abysmal and it is simply dangerous to ride your bike. Even if people have to take their kids to a daycare 20 miles away from their work. Even if they are not physically able to ride a bike, or if they don’t even think of it as an option in our car-oriented city.

I’m a red-blooded bike commuter. I don’t own a car. I get around primarily by bike, with the occasional use of bus and car sharing. I myself have been guilty of bike elitism, lording over family and friends who drive a lot how much more sustainable my lifestyle is, how much fitter I am because I bike and how much money I save.

But I hadn’t been on the receiving end of this moral snobbery until I moved to Portland and encountered folks that are way more bikey than me and whose transportation carbon footprint is a fraction of mine. I finally understood that the sustainabler-than-thou attitude is more damaging to the cause than helpful — simply because like any other elitist ideology, it excludes and elevates a certain group over another.

“Shame corrodes the very part of us that believes we are capable of change.”
—Brené Brown

“Shame corrodes the very part of us that believes we are capable of change,” says Brené Brown in her book, I Thought It Was Just Me: Women Reclaiming Power and Courage in a Culture of Shame. Shaming other people who use cars is only going to serve to disempower people and ensure that the bicycle movement remains small.

Car shaming excludes those who use cars in their daily lives yet are interested in biking and want to replace some car trips with bike trips. It excludes people who don’t have the wherewithal or interest in bicycling everywhere all the time.

Aren’t these the people we want to welcome to our club, after all? 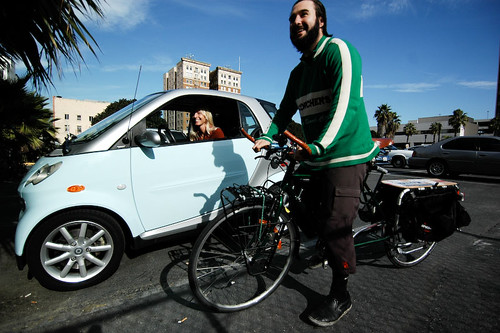 I share the belief that automobile use has caused a variety of damage on our planet, ranging from greenhouse gas emissions that are causing climate change to obesity to social isolation. And I love riding my bike and the fact that cycling is a kind of antidote to the damage that cars have done on our planet and humanity over the last seven or eight decades.

But as bicycle advocates, we have to hold ourselves to the ethic that we espouse – the ethic of a better world for all. We aren’t going to achieve this by excluding people from our bicycling community that we judge to be not car-free enough.

The only way forward is inclusivity. This means casting a wider net for invites to bike-fun events, it means hosting more events for beginners who don’t own all of the bells and whistles of cycling, and it means welcoming everyone, even if they drive to an event with their bikes. Inclusivity is going to lead to more people riding bikes, which will lead to more bike infrastructure in places like East Portland, which will lead to fewer car trips for people in the outer reaches of the city, which is good for all of us.