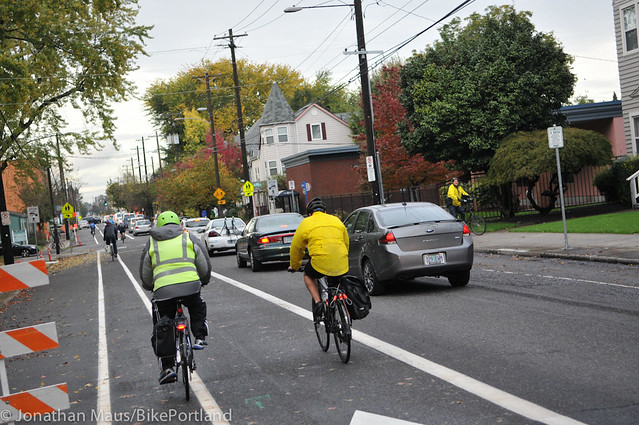 Not perfect. And yet…
(Photo: J. Maus/BikePortland)

It was shared by user pkulak:

After the corner of Williams and Broadway, a car was stopped in the bike lane, waiting to merge into the right auto lane. This was rush hour, when the line of bikes is so long you’re bike isn’t even guaranteed to make it through the light if you’re at the back of the line.

So what happened? Every single bike commuter just merged into the next lane and passed. Then, when the driver eventually caught up to the line of bikes, she rolled down her window and apologised (unnecessarily) to the whole line like a high school hand shake line after after a football game.

Just wanted to point that I see these kinds of incidents at least 50 times before I see anything negative. If you only read Preddit, you’d think Portland is the worst place to drive or ride a bike. It’s really one of the best places for both!

Thanks to reader Steve B for the tip.

The post Another memorable car/bike encounter on Williams appeared first on BikePortland.org.