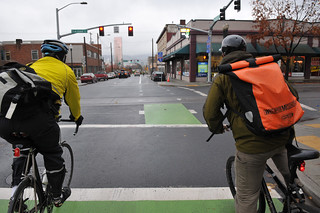 You can roll through, but only if it’s
safe and it doesn’t detect you.
(Photo © J. Maus/BikePortland)

As we get into the home stretch of the 2015 Oregon legislative session, I figured it’d be a good time to roundup all the action on the bills we’ve been tracking. This session wasn’t too groundbreaking when it comes to bicycle-specific bills; but there have been some interesting ideas and at least one bike bill of consequence is already headed to the Governor’s desk.

Senate Bill 533 – Allows bike and motorcycle riders to proceed through red signal under certain conditions
Ever come up to the red light that never changes? Now you will have the legal right to roll through it thanks to SB 533, which passed a vote in the House yesterday. This bill (here’s our post on it) was proposed by motorcycle advocates and initially did not apply to bicycle riders. It was only after some lobbying action by the Bicycle Transportation Alliance that “bicyclist” was added.

The BTA says passage of this law is “great news for bikes” that will make riding more convenient and efficient.

Interestingly, the Oregon Department of Transportation opposed the bill, as did the Governor’s Transportation Safety Advisory Committee. They fear the law will lead to deadly consequences for inexperienced riders who may not make good judgments on when it’s safe to proceed. Instead of a law, they would like to see a complaint-driven where people could call ODOT and have signals fixed.

At a hearing for the bill, Amy Joyce from ODOT’s Transportation Safety Division testified against the bill, saying, “Allowing this sort of behavior takes away from some of the predictability for motorcyclists and bicyclists.” Joyce said not all signals are the same and some people might not know what a “full cycle” of the signal is. To the predictability point, a House committee member asked, “What would be less predictable of this law versus what people do now – which is to break the law and do it anyways?”

House Bill 2564 – Inclusionary zoning
This bill is being hailed as a game-changer by affordable housing advocate. We covered it last month because of its potential impact on preserving income diverse neighborhoods in Portland. The bill passed the House last month by a vote of 34-25 and it has a Senate committee work session scheduled for May 19th.

Senate Bill 463 — Would allow drivers to have darker tinted windows with a note from their doctor
This is a bill I just heard about. It would allow people with certain medical conditions (that require “lower light trasmittance”) to have darker tint on their car windows than is currently allowed by law. This raises a big red flag for me because I rely heavily on being able to see drivers in order to make safe decisions on the road. Dark windows are very dangerous to everyone outside the car. This bill easily passed the Senate and has a public hearing scheduled for May 18th.

House Bill 2621 – Would allow City of Portland to use unmanned photo radar on high crash corridors
This bill is a top priority for Transportation Commissioner Steve Novick and the Portland Bureau of Transportation because it would give them a major new tool to fight speeding on our most dangerous streets. Much of what activists are lying in the street for right now has to do with people driving way too fast. Photo radar is proven to result in lower speeds, but PBOT currently lacks the legal authority to roll out a comprehensive photo radar program.

We reported this week that despite being stuck in committee, PBOT is optimistic they can get this bill onto the floors of both chambers for votes before it’s too late.

House Bill 3255 – Mandatory red rear lights for bicycles
The long, strange trip of HB 3255 might finally be over. This is the bill that started out as a mandate for all bicycle riders to wear reflective clothing. Its chief sponsor, House Rep. John Davis, thankfully pulled back that proposal and instead tried to mandate a red rear light (only a reflector is necessary now) for all bicycles ridden on Oregon “highways” (which in statute includes all public roads). Davis’ bill passed the House but it doesn’t look like it will get to the Senate floor.

The bill had a public hearing in a Senate committee yesterday. Rep Davis testified on its behalf; but veteran bike lawyer Ray Thomas was also there. As we reported last week, Thomas is adamantly opposed to the bill and his testimony (PDF) listed several reasons why lawmakers should give it pause.

In the end, using a rear light while riding is definitely the best, safest practice; but it seems there are too many devils in the details for it to be required by law. Time to pull the plug on this ill-fated “conversation” starter.

Senate Bill 117 – Task Force on jurisdicational transfers
This bill is very relevant to the protests we’re seeing Portland right now. If passed, it would create a special legislative task force to grapple with the issues around transferring roads and highways from state to local control. It passed a Senate committee last month but its currently still stuck in the Senate Ways and Means committee – which is a place many bills go to die. (Note: The failure of this bill doesn’t mean Portland leaders still can’t broker a deal with ODOT to take over control of our local highways like Powell, Barbur, and so on.)

Senate Bill 861 – Allow courts to use location data (like GPS) as probable cause to search for stolen bicycles
This was a neat idea, but it either failed to grab lawmakers’ attention, or its sponsor, Senator Chris Edwards, just didn’t push hard enough on it.

House Bill 3094 – Increase highway speed limit to 75 mph
Try as they might, Oregon lawmakers just cannot make this happen. With its first work session not even scheduled yet, this bill is dead. I sort of love that Oregon is bucking the national trend on this one and holding the line at 65 mph.

House Bill 3233 – Would shorten amount of time a driver’s license would be revoked following three or more DUI convinctions.
I didn’t follow this one closely, but I can’t fathom the rationale for going easier on such dangerous drivers who clearly don’t learn their lesson. I also know that dedicated activist Kristi Finney — a mom who lost her son to a drunk driver — testified against it. With no work session scheduled in its originating committee, this bill is thankfully going nowhere.

House Bill 2522 and 3102 – Requiring a permit or an outright ban on studded tires
Both of these bills looked to crack down on the scourge of studded tires, which cause millions of dollars of damage to Oregon roads each year. The permit bill sought $70 to use the tires and the other bill wanted to prohibit them entirely. Unfortunately neither bill got much traction.

Senate Bill 177 – Mandatory bicycle licensing and registration
Remember this one? Just the latest attempt at this seemingly sensible yet utterly flawed idea. It didn’t go anywhere. And hopefully, this is the last time it comes up (at least in this form).

Those are all the bills we’ve been following this session. I’m not a Salem insider by any stretch, so please share your insights if you’ve got them. Two important dates to keep in mind: If a bill doesn’t get a work session by next Friday (5/22), it cannot move forward (under most circumstances); and if a bill doesn’t pass both chambers by June 5th, it is officially dead.