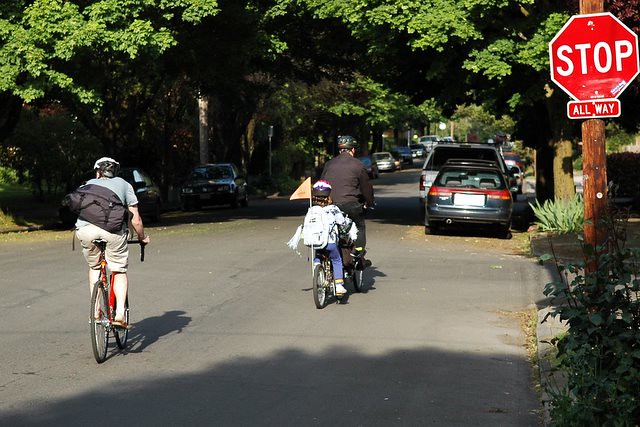 Idaho stop: Bicycle Quarterly’s Jan Heine created his own private code of conduct for the last six months: he treated red lights as stop signs and stop signs as yield signs while biking around Seattle. What he learned was pretty interesting.

Research shortage: Biking and walking get approximately as much federal research funding annually as chicken trucks.

Blame ratio: A Vancouver BC study found that in collisions where fault could be determined, people biking had the right of way 93 percent of the time.

Paid parking: The Oregonian catches the broader public up on the city’s evolving concepts about charging for street parking outside downtown.

Mode share: The Census’ commuting figures may be a very low estimate for the share of total biking and walking trips, according to a new study from Minneapolis.

Vancouver streets: The City of Vancouver’s Commission on Street Funding has launched an online tool to gather input about how to address its soaring projected pavement maintenance backlog and balance paving against other needs.

Quantifying roadkill: More than half of all known vertebrate species in California were reported as roadkill at least once in the last five years.

Self-driving cars: Google’s autonomous vehicles have been involved in 11 “minor” traffic collisions since their creation six years ago. Google claims they caused no injuries, that the self-driving car was never “the cause” and that the collisions involved 1.7 million miles of driving, including nearly 1 million in self-driving mode.

Car-free shopping: After New Zealand politician Dick Quax said “no one in the entire western world” uses trains or bikes for shopping, people around the western world coined the hashtag #quaxing to share photos of themselves disproving him.

Carless nightmares: In much of the United States, especially the fastest-growing cities, living without a car can mean sleeping five hours a night so you can get back and forth from your 10-hour hospital shift.

Housing shortage: Except for the neighborhood immediately around 122nd and Division, the median-income black household can no longer afford to rent anything in Portland larger than a studio apartment.

Bus-rack fatality: Last month in Detroit, a man was killed by a bus that ran over him while he struggled to remove his bike from the front rack.

Email etiquitte: Bicycle anthropologist Adonia Lugo has some advice from moderating two listservs about bikes and equity; she’s only had to evict one participant so far.

And your video of the week is a look at Philadelphia, the biking capital of the Northeast and the country’s bikingest city of more than 1 million residents:

The post The Monday Roundup: Testing the Idaho stop, the origin of helmets and more appeared first on BikePortland.org.