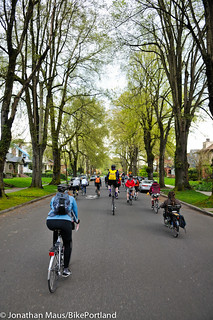 One of Portland’s busiest bicycling streets is set for a repaving project next week. The City of Portland says they’ll start work on SE Ladd Avenue between Hawthorne and Division on Monday June 1st and the project will last through Tuesday the 9th.

Be advised of lane closures and detours from 7:00 am to 5:00 pm each week day. The Bureau of Transportation plans to pave 1.78 lane miles off Ladd Avenue — including a complete repaving of Ladd Circle.

Here’s more about the detours and closures from PBOT:

During work hours, SE Ladd Avenue will be open only in one direction, to inbound travel. People traveling towards downtown by bus, motor vehicle and bicycle will be able to share the road during those hours.

During non-work hours, the street will be open to all travelers. Portions of the road will have a rough surface until paving is complete. Access will be maintained for businesses and residents during the project.

PBOT says their work schedule could change depending on the weather. They are also reminding everyone to use caution in the area and expect delays during the project.