Sam Adams might have left Portland for a job in Washington DC back in January; but it looks like the biking bug he caught while serving as our city’s mayor between 2008 to 2012 traveled with him.

Adams, who — for better or for worse — was a champion for bicycling throughout his political tenure in Portland, is now the newest member of League of American Bicyclist’s board of directors. In an announcement by the League yesterday they described Adams as “a strong advocate for safe bicycling and pedestrian options” who “helped expand Portland bikeways system by 75 miles, and focused new investments.”

After leading the Portland City Club, Adams is now director of the U.S. Climate Initiative for the World Resources Institute.

I caught him via email yesterday and asked him a few questions about his new role with the League and how bicycling might fit into his work on climate change:

BikePortland: Why did you want to be on the League’s board?

I want to use lessons learned as a local government leader to help bicycling reach its full potential in this nation as a neighborhood-strengthening, cost-effective transportation option that offers multiple benefits to promote health, environmental sustainability, affordability and access equity.

Any particular focus/emphasis/interest you will represent on the board?

As a Board member, I hope to help strengthen the League’s partnerships and connections with both national business and racial justice organizations. 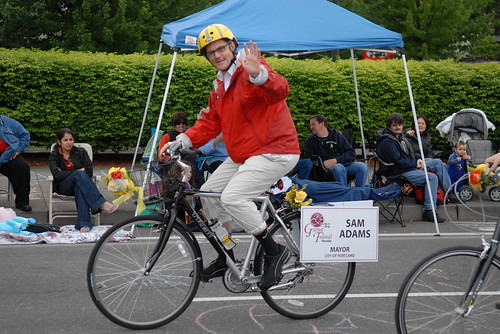 Has bicycling played a role in your work on Climate Change at the WRI yet?

At WRI, we have just embarked on an effort to compile and report on greenhouse gas emission data on a U.S. city-by-city basis — hard believe but this has yet to be done. We are working to include all transportation-related climate pollution data, including a more accurate accounting of avoided greenhouse gas emissions base on bike trips. Nerdy stuff but important research that can serve as a factual basis to improve how we plan and operate bike infrastructure and more fully integrate more it into all transportation projects.

Do you miss Portland?

I am fully engaged and into my national climate action work here in DC but I do miss Portland a lot. Take a bike ride for me on the Springwater Trail!

Looks like Adams is in a position to have impact on climate change. Here’s to hoping his experience in Portland and now with the League allows him to fully leverage bicycling as a powerful tool to stop it.