It’s been one week since an “urgent” street safety meeting was called by Portland Mayor Charlie Hales and Commissioner Steve Novick. City PR staff insisted the meeting was “multimodal” but it happened only because a scary spate of collisions involving people on bicycles was dominating the news cycle and social media. That meeting didn’t bear much fruit and was referred to later by the Mayor’s office as nothing more than a “listening session.”

Not surprisingly, the urgency around bike safety that existed two weeks ago among the local media and the greater Portland community is gone. The only people still focused on this issue (at least publicly) are the dedicated activists that played such a large role in putting the issue on the Mayor’s radar in the first place.

Those same activists — and many other Portlanders — are now wondering what’s next. “Has anything changed since that meeting?” was how one person put it on Twitter this morning.

The good news is that volunteer activists — many of them affiliated with BikeLoudPDX — are feverishly trading emails, ideas, and meeting plans. They have not let up and I’m excited to be seeing the most promising groundswell of bike activism Portland has had in the past 10 years. Meanwhile, professional advocates at the Bicycle Transportation Alliance, Oregon Walks, and other groups are also working to get Mayor Hales and Commissioner Novick to fully embrace Vision Zero.

On that note, last week I joined Novick’s Transportation Policy Advisor Timur Ender, the BTA’s Rob Sadowsky, and PBOT Bicycle Coordinator Roger Geller on the KBOO Bike Show. Give that show a listen to better understand the state of city in terms of bike safety.

While all these efforts continue, I thought it might be helpful to share a few of my own ideas about what concrete steps City Hall can take to make biking better in Portland right now. I’ve been critical of the lack of leadership and lack of action on this topic, so it seems only fair that I put some ideas on the table.

So, here are the things I’d like to see happen right now: 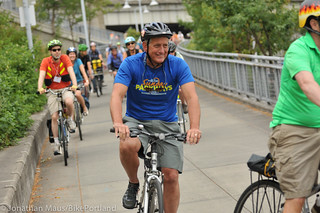 Mayor Hales needs more real-life biking experience
One problem with our politics in Portland right now is that no member of City Council (including Mayor Hales) has the perspective of a daily bike rider. Sure, Mayor Hales and Commissioner Nick Fish ride bikes, but they only do it for photo ops that usually include some type of closure and/or police escort. That is not realistic. There’s simply no way to understand the urgency of the bike safety issue unless you are in the trenches — and that means riding every day through all types of conditions on all types of streets.

Mayor Hales should make a public promise to bike as much as he can everyday for a week. This would be a great PR stunt to bring attention to issues and at the end he’d have a much better understanding of why so many of us are so passionate about the need to make biking safer. Now.

Put a line on the map
I think Hales and Novick missed a huge opportunity last Tuesday when they didn’t announce any new infrastructure projects. They are currently sitting on about $6 million in earmarked federal funds to build protected bikeways downtown. That project has languished for over two years now. Let’s commit to something. Let’s put a line on the map and say, “This street will be the best street for biking in America!” We have the money, we have the public will, we have the momentum. There’s nothing to be afraid of except the consequences of doing nothing.

Update the Community Policing Agreement
It’s been seven years since advocacy groups partnered with the City to write the first-ever, transportation-oriented Community Policing Agreement. Ironically, it was first drafted in April 2008 following a tragic spate of bicycling collisions that included two fatalities. It’s time to update that agreement. And I’m not the only who thinks so. New Portland Police Chief Larry O’Dea has mentioned this to me several times now. The agreement could include policy commitments as well as a road map for how city agencies and local advocacy groups could work more closely together. (Download the current one here.)

Paving projects should be safety projects
Much of the debate about PBOT spending is about “paving versus safety.” That isn’t helpful. Mayor Hales and Commissioner Novick could rise above that debate and commit to doing a safety and striping audit as part of every paving project. PBOT has a great track record of already doing this, and even Mayor Hales himself has mentioned it. At last week’s safety meeting he said: “We can be smart with investments… when we’re repaving do the right type of striping at the right time.” He and Novick should go one step further and make a public promise, in writing, to analyze each paving project to make sure safety improvements happen whenever possible.

Create a temporary diverter program
One of the only real “bike safety action items” Mayor Hales has committed to since last week’s meeting is to experiment with traffic diverters. This comes after Portlanders have pressured him to decrease the amount of driving on neighborhood streets where bicycling should be prioritized. I’d like to see this set up, not as a one-off experiment, but as a full-fledged program within PBOT similar to the crosswalk enforcement actions they’ve been doing for many years. This one should be easy for advocates to get since Hales has already said he’d do it. All that’s missing is a location to start with and a timeline to implement it.

I think all of these proposals are reasonable and politically viable. All that’s missing is the follow-through and execution. If Mayor Hales and Transportation Commissioner Novick want to be taken seriously as leaders of our city, they’ll stop making promises and start taking action. These suggestions won’t fix everything, but they’re a good start.

The post What next? My suggestions for actions City Hall should take on bike safety appeared first on BikePortland.org.